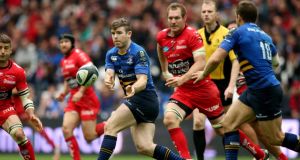 Gordon D’Arcy’s announcement does not rule out the possibility of a World Cup farewell. Photograph: James Crombie/Inpho

It’s been one of the stellar Irish rugby careers, for sure, and when the end of October comes and Gordon D’Arcy heads into the sunset he can do so with his head held high. His is the last link with the Irish team of the 90s, and that in itself is as remarkable as his many achievements on the pitch.

His international career spans 14 seasons, although admittedly there was a three-year gap between his first cap at the 1999 World Cup and his second in November 2002. D’Arcy then re-invented himself as a centre in the 2004 Six Nations, and self-deprecatingly he would happily quote Liam Toland’s assertion that the move to centre from full-back/wing would suit him as it afforded him less time to think.

But, partially formed by the club game with Lansdowne, he’s always had good instincts. That helped him survive the midfield jungle when, given his size, he had no right to. Even allowing for match programme and online pen pics maintaining he is 5ft 11in, to have survived 11 seasons as a Test centre against all those behemoths was remarkable, never mind that he won a Slam and two Six Nations titles to go with his three Heineken Cups.

That he did so was down to his innate, heads-up footballing ability and simply wondrous footwork – as good as his celebrated sidekick. As well as forever ensuring he could attack soft shoulders and gain yardage when he seemingly had no right to in the increasingly congested midfield traffic, along with his defensive reading of the game, it also enabled him to be a superb tackler.

Having been the player of the Six Nations in Ireland’s 2004 Triple Crown success at outside centre, he then sacrificed himself as an inside centre upon Brian O’Driscoll’s return, which was fair enough.

But also akin to O’Driscoll, D’Arcy was superb in manoeuvring his body quickly over the ball and engineering turnovers or penalties. Leinster and Ireland have missed their two auxiliary flankers this season.

Initially, he had been the outstanding player of his schools year at fullback, never shy of running back the ball even with 29 players in front of him – although he would joke later that he chose to do this because he couldn’t kick the ball.

On foot of that schools campaign, Warren Gatland rang Clongowes Wood to see if D’Arcy would be available to join the full Irish tour to South Africa in 1998, but the player was unavailable as he was sitting his Leaving Certificate.

Perhaps that was just as well, for the Wexford-born player admits he wasn’t ready for the professional game when first thrust into it. In tandem with his transformation on the pitch was his metamorphosis off it – and no less than his celebrated sidekick, there were a few dodgy hairstyles along the way as the 42.ie ‘highlighted’ yesterday – from a carefree soul to an uber-professional who sought his own nutritionist and became meticulous in his diet.

His form last season justified him staying on one more season and at 35 yesterday’s announcement does not rule out the possibility of his having a World Cup farewell. Alas, he has paid for a couple of poor performances in December, and also for Matt O’Connor’s desire to accommodate what he sees as Jimmy Gopperth’s superior game management at outhalf and Ian Madigan’s superior goal-kicking at inside centre.

Again though, both Leinster’s attacking game and especially their defence has seemingly suffered. The timing of his departure also does not rule out the possibility of providing Leinster with some cover during the World Cup.

In addition, he was always an interesting, honest and enjoyable interviewee, and generally a good bloke. He never made much of his regular work for his chosen charities Barretstown, GOAL, various children’s hospitals in Dublin, Brainwave (an epilepsy society in Ireland) and the Irish MS society.