Gerry Thornley: Schmidt’s men in good shape ahead of tilt at the World Cup

Saturday was a one-off. Come the big games, it will be business as usual 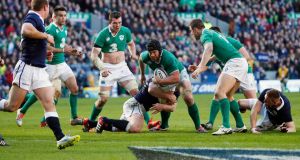 After the most unforgettable finale ever to a relatively forgettable tournament, the question is whether the unique circumstances of last Saturday’s scattered, three-way tussle for the title on points difference was a complete and utter one-off?

Could it be, in any way, a liberating turning point, proof that the northern hemisphere can chuck it around like their southern hemisphere counterparts? Or will pragmatism reign when the heavyweights collide at World Cup time and when the Six Nations returns?

In all certainty, Saturday was a one-off. As Wales set about running up 60 points and setting Ireland a target of a 21-point win, who in turn ran up 40 to set England a target of +26, it was like last day at school. Wales scored eight tries, having managed just five in their previous four games.

Ireland doubled their tally of tries from four in their previous four games, whereupon a French side, that had scored just four tries and conceded just two, involved themselves in a 12-try jamboree with an England side desperately going all out for tries.

These teams mightplay with such freedom against a ‘minnow’ in the group stages when searching for bonus points, but not when they face each other, and certainly not in a knockout match such as a World Cup quarter-final, semi-final or final. Who wants to risk making a mistake in one of those games?

Ditto next season’s Six Nations. When, for starters, will the tournament be blessed by blue skies and glorious sunshine across three cities on the same March weekend? Never mind that last Saturday constituted the first time when three title protagonists began and finished the day on the same number of points.

There have been some, inevitable and even understandable bleatings from across the water at the manner England missed out on points difference for the third successive year. After two near misses, an even more excruciating one was hard to take, all the more so as there had been a strong belief that England would win the Grand Slam as a precursor to hosting the World Cup later this year, particularly after going to Cardiff on opening night and producing probably the win of the tournament.

After a championship which ended with three sides within 10 points of each other, there will be all manner of regrets and grievances. Even Ireland will have regrets, specifically the opening 15 minutes in Cardiff which left them 12-0 down and with the inconsistent and fastidious performance of Wayne Barnes.

But playing the referee is a vital component of modern-day rugby, something Ireland have been reminded of.

That costly blip apart, as Joe Schmidt said in the aftermath of Saturday’s title success, they could actually take heart from doing so much so well for the remainder of the match. Ultimately, that resilience and manufacturing that lineout maul try also went a long way towards clinching the title.

Ireland emerge from the tournament in good shape, not unlike England in 2003, with back-to-back titles rather than a Grand Slam, a warrior lock as captain, a host of proven and experienced campaigners, an outhalf controlling things at the peak of his game, and an outstanding coach and coaching ticket at the helm.

Allowing for that blip in the first 15 minutes against Wales, which underlined why Schmidt places such store on the importance of the aerial stuff, Ireland are as proficient as anyone in the air with their battery of sometime fullbacks and players who enjoyed Gaelic football in their youth.

The return of Sean O’Brien added some badly needed ballast in the ball-carrying and there is more where that came from in defence. For sure, despite more ambition than they were given credit for, Ireland only found their backline accuracy and potency in the final outing but this part of their game can hopefully only develop as their new midfield partnership grows in experience.

Accordingly, Ireland are now the third-ranked side in the world and 8/1 fourth favourites for the World Cup, with England alongside South Africa as joint second favourites at 9/2 – understandably so. They will have the hurt of last Saturday to motivate them, have developed their running game and their second-row will be incomparable come the World Cup.

Australia are 9/1, Wales 14/1 and France, remarkably, are as low as 20/1. Ireland can take encouragement from not having lost to France once in this World Cup cycle, and of having beaten them and Italy back to back.

France have slipped into the bottom half for the last three years but last Saturday was a reminder that they can be as dangerous as ever at a World Cup, not least as they’ll have been in camp longer, will be better prepared and not as depleted by the demands of the Top 14.

One ventures Ireland won’t be such strong favourites when the sides collide at the Millennium Stadium in what will likely be the defining game of the year.