Gerry Thornley: Leinster should be thanked for breaking monotony of Champions Cup 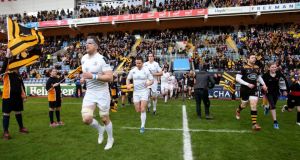 Jamie Heaslip leads his Leinster team onto the field before their Champions Cup match against Wasps at the Ricoh Arena. Photograph: Dan Sheridan/Inpho

The redrawn European club map in the shape of the European Champions Cup was driven by the Anglo-French club axis to ensure that the bigger economies of the English and French games would receive a greater percentage of the tournament’s commercial revenue. And so it has come to pass that only Leinster dare spoil the Anglo-French carve-up of the competition.

To Leinster therefore, the tournament should be grateful. If, say, Toulouse hadn’t fallen on their faces and Harlequins had edged out Leinster, there would have been a dreary sameness to the quarter-final line-up – potentially featuring four Top 14 sides entertaining four from the Premiership.

Whether this is an ominous portent of things to come remains to be seen. History has shown us that too much can be read into one campaign. For example, when Toulouse beat Biarritz in an all-French final at the Stade de France in 2010, good judges forecast the rule of the French for years to come.

Both had benefited from home semi-final draws (against Munster and Leinster), and the following season Leinster beat Northampton (both of whom had been drawn at home to Toulouse and Perpignan). Then, in 2012, there were three Irish sides amongst five Celts in the quarter-finals, three of whom reached the the semi-finals as a precursor to a first, and assuredly last, all-Irish final.

That was a high which will likely never be repeated, and regardless of the change in format, the Pro12 may well have been down to one representative this season anyway.

Ulster’s off-field planning left something to be desired in terms of succession planning on and off the pitch when releasing Mark Anscombe. However, any club would have struggled to cope with the loss of their director of rugby, head coach, captain and a world-class tighthead

Ulster simply couldn’t match the financial offers from Gloucester (currently ninth in the Premiership) for both John Afoa and David Humphreys, which, no less than Northampton’s signing of George North or even JJ Hanrahan, underlines the clout of Premiership clubs who can sign marquee players outside of ever-increasing salary caps.

The new format also resulted in two teams advancing for the first time after losing their opening two matches. All of that should maintain interest for more clubs, although it was fortunate for the tournament that Munster, Ulster, Montpellier and Treviso stayed competitive on the final weekend despite the flawed scrapping of the ranking system in deference to domestic league standings.

Clearly though, it’s going to be tougher for the Irish and the Celts to punch above their weight in the future. Not alone have the Anglo-French club axis increased their slice of the European Cup television and commercial cake from a combined 33 per cent to 50 per cent, but they have been blessed with the emergence of two new sports subscription channels, as well as the advent of mega-rich benefactors like Mourad Boudjellal, Jacky Lorenzetti, Bruce Craig and others.

The LNR (ligue nationale de rugby) yesterday renegotiated their deal with Canal+ for television rights to the Top 14 for the next four seasons to the tune of €74 million per year. This is even more than the €200 million-plus secured by Premiership Rugby for the four-year rights to the Premiership and, in conflict with the ERC deal, to the Heineken/ European Cup as well. By comparison, the combined television rights for the Guinness Pro12 are probably in the region of €10-12 million.

Largely funded by their own union, and without further investment from private benefactors, the provinces are restricted to just three overseas’ players and one project player, as they are prime feeders to their national team.

Hence, the bulk of the Leinster squad – around 13 are liable to be on duty per game – will be involved in the Six Nations, and will not play for Leinster again until the quarter-final, unlike the majority of Bath and especially Toulon players. Recall how emotionally and physically drained Leinster were when losing to Toulon three weeks after winning the Six Nations in Paris last season.

Hence, the decision to run off the knockout stages with indecent haste in three fortnightly intervals after the Six Nations means some Leinster players might have to play up to eight monumental Cup games in an 11-week period. Not even James Heaslip can do that. gthornley@irishtimes.com

Bríd Stack released from hospital with no spinal damage 11:46
The Offload: Ronan O’Gara more than willing to take a punt on Jack Crowley 10:00
Spirited finish allows Kevin Na to win Sony Open 09:09
All in the Game: Glowing tributes few and far between as Özil’s Arsenal exit nears 09:00
Messi sees red as Bilbao claim Super Cup glory 08:56
Crossword Get access to over 6,000 interactive crosswords