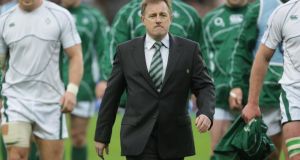 News of Eddie O’Sullivan’s apparent dismissal as head coach of Biarritz Olympique will have understandably disappointed the many pundits, coaches and players alike who believe in his coaching abilities, and who lauded his appointment at the famed Basque club before the start of last season. But as forewarned in these pages, there was always the potential for his reign by the sometimes treacherous seas of the Pyrénées-Atlantique to hit choppy waters.

French club rugby is a soap opera in which ‘foreign’ coaches do not tend to flourish. For sure, Vern Cotter had a lengthy spell in charge of Clermont Auvergne, and with Joe Schmidt as his assistant, finally led them to their first Bouclier de Brennus in 2010. It remains their only triumph in 12 French Championship finals, before Cotter also moved on last season.

Even Michael Cheika only lasted two seasons at Stade Francais, where there was a reluctance to take on board his methods and demand for greater professionalism. Ultimately, he was the victim of a French club rugby coup from within, and yet he has since become the only coach to augment a Heineken Cup triumph by winning the Super Rugby trophy.

Admittedly, Bernard Jackman and Mike Prendergast are doing well at Grenoble, and Ronan O’Gara is cutting his teeth as an assistant coach at Racing Metro, while Stade did win the French championship last season with Argentinian head coach Gonzalo Quesada. But he had played much of his club career in France, and on top of the language difficulties, French rugby is not especially open to outside coaching influences.

O’Sullivan’s appointment before the start of last season was seen by his supporters as a marriage made in heaven, between a fallen giant of French rugby and a coach who had been unemployed for three years since stepping down as head coach of the USA Eagles. It was almost seen as a fait accompli that he would restore them to the Top 14 after their relegation at the end of the 2013-14 season.

However, it was never going to be that simple. Biarritz had become a shell of the club which had won back-to-back French championships in 2005 and ’06, the latter coming by virtue of a 40-13 win over Toulouse three weeks after losing the Heineken Cup final to Munster in Cardiff by 23-19. Back then, their golden generation of Dimitri Yachvili, Imanol Harinordoquy, Damien Traille et al were in their pomp. Biarritz also had one of the four biggest budgets in the Top 14, thanks in the main to the backing of Serge Kampf, a French businessman who founded the computer services company Capgemini in 1967 and is a friend of former player cum club president Serge Blanco.

Now 80, Kampf retired from Capgemini in April of 2012 and has curtailed his investment in Biarritz, and while Blanco stepped down as club president, to be replaced by former fullback Nicolas Brusque, few doubt Blanco’s pervasive influence has been completely diluted.

As the nouveau riche of Toulon, Racing Metro, Stade Francais and others were backed by wealthy benefactors, a great Biarrtiz team grew old together, and they flirted with relegation in 2012-13. In 2013-14, Biarritz won just five matches out of 26, and finished a whopping 21 points below safety. There followed a flight of wild geese-like proportions. On top of the retiring Yachvili, Harinordoquy, Traille, Raphael Lakafia, Yann Lesgourgues, Francisco Gomez Kodela, Thibault Dubarry, Teddy Thomas, Fabien Barcella and Arnaud Héguy all moved on.

O’Sullivan and co had to build virtually a new squad, and on foot of relegation, their annual budget dropped from €16.8 million to €11 million. Granted, this was joint top in the division, along with also relegated Perpignan. But readjusting to life in a second tier after a prolonged stay in the top flight can be difficult for any club. Biarritz’s 18-year stay in the French Championship’s top division had them ill-prepared for life in the unremitting, 16-club ProD2, with its 30-game slog, at the end of which only the top placed side wins automatic promotion, with second to fifth entering play-offs.

Last season, Pau (with James Coughlan a leading figurehead) won automatic promotion, with Perpignan finishing third but losing out in the semi-finals on a try count after a 32-all draw at home to Agen. As for O’Sullivan’s Biarritz, they didn’t even make the play-offs; finishing two places and three points outside the top five.

Amid a mooted merger with bitter Basque rivals Bayonne, Midi Olympique recently reported that Biarritz has a financial hole of €2.5m, which Kampf was allegedly willing to pay off “only in the event of a rapprochement between the two clubs”.

In the event, the virulent opposition of fans, especially Bayonne’s, scuppered that idea, but this in turn prompted huge uncertainty within Biarritz as to future playing contracts. Coupled with their financial difficulties, this led to the departure of nine players, only three of whom have been replaced, as the club dipped further into their academy.

When Biarritz lost their opening three games, 28-25 at home to Aurillac, by 20-9 away to Montauban and by the same score at home to Albi, Brusque prevented O’Sullivan and his backs coach Pierre Chadebech from attending their fourth game, a 22-11 defeat away to Pays d’Aix last weekend, which left them afoot the ProD2 table with one point. This apparently grim finish to O’Sullivan’s time at the club, with another year on his contract, does not make him a bad coach, but alas, it was always capable of ending in tears.

1 Betting shops face uncertain future as they prepare for Monday reopening
2 Mature Ringrose keeping the ups and downs of rugby life in perspective
3 Tianna Bartoletta: ‘After you’ve gotten your medal, you become black in America again’
4 Ian O’Riordan: An education in race and running during college days in America
5 Matt Williams: World needs team sport more than ever in these tough times
Real news has value SUBSCRIBE