Four provinces can bank on strong line-up of young talent 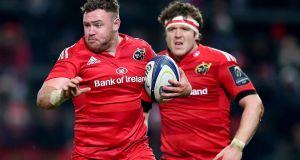 Munster’s Dave Kilcoyne in full flight against Leicester Tigers: came through the Munster academy from the 2011-2012 season. Photograph: Dan Sheridan/Inpho

Leinster’s recent Champions Cup victory over Bath at the RDS offered a glowing testimonial to the province’s academy, given the handsome contribution made by half a dozen of its former and current constituents.

Any pre-match anxiety about the callow composition of the home team dissipated over 80 minutes. The majority of the Leinster supporters traipsed off into the Dublin night, lightened in heart and mind by how bright the future appeared if that evening was a barometer of things to come.

The Leinster Academy has long been regarded as the poster establishment in Ireland and, for some observers, one that cast a long shadow over those in Munster, Ulster and Connacht. They appeared anaemic in quality and quantity terms of players progressing to the senior team; there was more than a touch of academy envy among the disgruntled.

Leinster remains the only academy that offers an educational qualification, a Quality and Qualifications Ireland (QQI) diploma for those who successfully complete all the modules over the three-years; QQI is the rebranded name for Hetac.

However, based on playing numbers, population and the strength in depth of the schools and clubs game, it is not an equitable comparison. This is because of the skewed playing field when holding up the Leinster version against its provincial academy siblings.

The strike rate elsewhere is pretty impressive too (see below: Academies 2011-2012: Where are they now?). Arbitrarily taking a peek at the academy rosters of five seasons ago (2011-2012), what is immediately obvious is that the Munster (Peter Malone), Ulster (Kieran Campbell) and Connacht (Nigel Carolan) academies are well run and that the talent identification programme has been reasonably prescient.

All the academies are vetted by the IRFU a couple of times a year. There is a similar curriculum that deviates in details or emphasis here and there. The talent identification of players begins at Under-15 level in Connacht and Ulster, under-16 in Leinster, while Munster’s is under-16 for club players and under-17 for schools.

As Connacht’s Nigel Carolan says: “It’s easy to select talent but less clear-cut in identifying potential. You resource potential, not talent.” All four provinces boast sub-academies and it is only the exceptional that skip this benchmarking process and go straight to academy status or, in the case of one or two down the years, straight to a senior contract.

There is a huge emphasis placed on ensuring individual development off the pitch, giving players the tools to cope with the mental, nutritional and financial demands as well as encouraging them to pursue their studies.

Munster academy manager Peter Malone says: “What we found is that those players who don’t engage in third-level education lose a little perspective; the fella who has all the time in the world will be the guy who is generally late for a session, while the guy who has 44 different things to do for college will be the guys who is on time. That’s what we have found on a practical level.”

The academies are all run by management boards and every year there is a review of each individual, based largely on recommendations of academy managers and their staff with an eye to progression and filling places in the short and medium term in the senior squad.

Stuart Olding (Ulster) is another Irish international, as are Kieran Marmion (Connacht), Tadhg Furlong, Marty Moore, Jordi Murphy and Noel Reid (all Leinster), as examples from that particular season. That doesn’t take into account a number of players who have established themselves or in the process of doing so with the senior provincial squads.

So while Leinster continue to lead the way, the supporters of Munster, Ulster and Connacht can take heart from the work in the academies as a primary pathway in replenishing the playing pool.