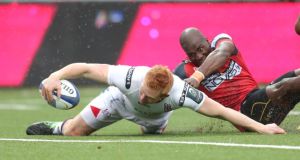 Oyannax won the first half 23-0, whereupon Ulster won the second 24-0. Just like that. If the first half suggested Ulster’s strength in depth was insufficient to even tamper with their first-choice line-up against a largely second-string French team sitting second last in the Top 14, the second re-affirmed what a different team they are when Ruan Pienaar and Paddy Jackson are in harness.

Their introduction, along with Nick Williams and a remarkable improvement in the scrums, turned the game on its head. In truth, Ulster would have been kicking themselves all the way back to Belfast if their selection strategy over these last few games had seen them leave this one behind after their double over Toulouse.

With the big-name trio’s introduction came a renewed sense of purpose from previously underperforming players; Robbie Diack growing into the game, and Stuart McCloskey carrying more and more forcefully with another tour de force, as did Luke Marshall and the outside three, where Rory Scholes impressed all day.

The injured Wiehan Herbst had been sorely missed at scrum time but with the introduction of Williams, and Diack moving into the secondrow, along with whatever problem solving was conducted at half-time, they even steadied the scrum and stopped a steady stream of three-pointers.

With the defence tighter and the clearing out more effective – where before Ulster played too much behind the gain line – Jackson ran onto the ball, took it to the gainline and brought his talented backs into play. Not so much a game of two halves as two completely different games.

A supposedly second-string team can be a dangerous beast, and unsurprisingly Pedrie Wannenburg was up for a renewal with his former team-mates. He was helped into the game when badly missed early on by Chris Henry and thereafter was picked out by Ian Humphreys’s restarts, of which there were too many.

However, the one thing you don’t want to give a French team on home soil, is an early scrum foothold. But on Ulster’s first two put-ins they were driven back, and on the second occasion Roger Wilson couldn’t clear the ball away in conceding a penalty for not releasing.

Oyonnax went up the line and from the take by George Robson, Ulster’s maul defence splintered as the home pack drove on for hooker Jeremie Maurouard to score. Nicky Robinson converted from the touchline and a tricky tie became a whole lot trickier still after Ricky Lutton slipped off a tackle on Maurouard and Alaska Taufa’s chip in behind was re-gathered by Quentin Etienne.

Several Ulster players were off their feet close to their own line for Robinson to made it 10-0, and then they landed another scrum penalty. Now they and the home crowd alike were interested, all the more so when the Ulster scrum suffered the indignity of being pushed off their own ball.

“C’mon Ulster, pick it up,” implored one of the travelling fans. It was to no avail. Ulster buckled on their own put-in again, Lutton being penalised for twisting in, and Robinson made it 16-0.

Ulster did come knocking, but after Scholes came off his wing to take Paul Marshall’s pass, the scrumhalf lined up his namesake in midfield, but Luke Marshall had already over-run a delayed service – not for the first time – and the ball bobbled along the 3G surface for Uwa Tawalo to gather and take off for an untouched 90 metre run-in with Humphreys for company. So it was 23-0 at half-time.

Cue the triple substitution and while it’s not as if they could scrummage, there was, immediately, a far better shape to Ulster’s attack. Craig Gilroy knocked on, but Ulster attacked again off a lineout, McCloskey lining up the defence for another charge only to feed Scholes on his inside; the left winger ghosting through the ‘10’ channel, escaping one tackle and swerving around another as a four-man scramble converged on him for a fine finish.

But on 55 minutes when they turned down three points to go to the corner, Best’s slightly undercooked throw for Diack at the tail was picked off by Maurie Fa’asavalu. Briefly, they became too lateral in the next wave of attacks, before the impressive Scholes chased down a Pienaar box kick and won a penalty. Pienaar tapped and went, and from Williams’s carry, Jackson identified space out wide to execute a loop with McCloskey, Louis Ludik drawing Eamonn Sheridan for Gilroy to apply another good finish. Jackson’s touchline conversion made it 23-14.

Better still, with 12 minutes left Ulster trimmed the lead to two points. From a scrum which wobbled but still retained possession, McCloskey and Luke Marshall made strong carries in turn to take them to the line, as did Best before Kyle McCall had the wherewithal and strength to rip the ball from his captain and plunge over the line.

Ulster’s chance seemed to have gone with the concession of a couple of penalties, but after turning over an attacking maul by Oyannax, Jackson recognised the space to move it from deep; McCloskey making more inroads. When Oyannax went off their feet at a ruck on half-way, Jackson had the confidence to go for goal from half-way, and cleared the bar comfortably.

Even then, Ulster lost a groggy Williams and suffered a scrum turnover, before summoning the effort and technique to shunt the Oyannax scrum off their own ball. An ironic final twist to complete the turnaround.