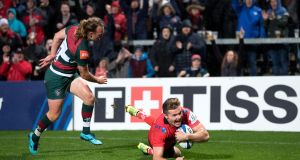 On rain-sodden European opening nights such as this, the result is paramount, the performance secondary. Wasteful in the first half, Ulster held their nerve to deservedly pull clear with more breathing space than seemed likely for much of the first hour.

In the context of their season, this was huge. Ulster have restored some of the feel-good factor around the Kingspan Stadium, seizing key moments, drawing energy from the crowd and eventually translating vast swathes of the possession and territory into hard sought after tries.

They kept believing when their confidence might have wavered, and their big men – Rory Best, Iain Henderson, Stuart McCloskey and the classy Will Addison with Sean Reidy also big off the bench – delivered. In all they had 20 lineouts, all but one in the opposition territory, thanks in large part to a 13-6 penalty count and eventually they made it pay.

They can travel to Racing’s enclosed La Defense Arena next Saturday with the pressure to some degree off, albeit Racing won 14-13 away to the Scarlets.

As for Leicester, they have been increasingly short of quality in latter years, and save for their potent scrum, some stubbornness and snatches of attacking, they showed little here.

A tad threadbare due to an injury toll which included Luke Marshall and Darren Cave in midfield, the ensuing reshuffle had seen Addison restored at outside centre with 20-year-old Academy player Michael Lowry, nominally an outhalf, play at fullback. And the youngster can feel proud of the way he survived quite an ordeal in only his second start, and first at fullback.

One look at the Ulster team sheet was seemingly enough for Geordan Murphy, a gem under the high ball in his classy playing days. Cue an aerial bombardment of Lowry.

Lowry’s fellow 20-year-old, Jordan Olowofela, was the chaser in chief, and while they are the same age, the England Under-20 star is 6’ 2” to Lowry’s 5’ 7”. Six times in first 20 minutes Lowry saw the sodden ball rain down on him, and in general he coped manfully.

Lowry did spill one steepling up-and-under, from George Ford, in front of his posts, and Ulster were probably relieved that Leicester opted for an opening three-pointer courtesy of Ford rather than pitch tent for the seven.

The scrum apart, Ulster were much the more disciplined side (the penalty count was 9-4 in the first half) and eschewing shots at goal, this contributed to them having 13 line outs in the first half, all but one in the Tigers half and most in the opposition 22. But they couldn’t make them count.

They lost one to Mike Williams in the air, another on the ground after they were legally sacked and finally a miscommunication or under throw (it was hard to tell which) yielded only a scrum, which they lost control of at the back.

Ulster played in snatches, their best moments often being individualistic and unstructured. Tellingly, for example, their best moment of the first half was when Billy Burns worked a counter-attacking switch with Addison, and one of Ulster’s brightest lights this season used his footwork and strength to break through. He found Lowry in support, who was hauled down around the neck by Ford.

Ulster opted for a five-metre scrum but, typical of their impatient and imprecise use of the ball, after two phases John Cooney, Best and Burns worked the ball to Craig Gilroy, who dived low for the line by the corner flag but was steered over the touchline by Jonah Holmes.

Two more penalties into the corner would prove fruitless in the continuing absence of Ford, by the end of which they were grateful for Marcell Coetzee’s turnover penalty after Sione Kalamafoni and Leicester’s forwards had rumbled to within inches of the Ulster line.

Marty Moore was introduced for his first outing since May in the 34th minute for Ross Kane, and his first involvement was to be tackled off the ball by Williams, but opting for another kick to the corner from 40 metres out again yielded nothing.

A poor first half ended with Ford taking so long over a drop goal that Best charged it down, and so it ended 3-0.

The pattern was renewed almost without interruption and merely at the other end when Leicester began the second half by conceding another brace of penalties and Ulster went into the corner twice more.

Finally, Ulster turned attacking lineout number 14 into points. First Nick Timoney charged infield off Henderson’s take, then Coetzee took it on, before Alan O’Connor plunged for the line. Cue the loudest, most guttural roar of the day, and by some distance.

Cooney converted for a 7-3 lead and almost immediately it seemed Ulster had delivered a double whammy. Best broke out, and offloaded superbly to Timoney, who sped to half-way before passing inside to Cooney. He kicked to the corner before being tackled and Gilroy chased hard to tackle Adam Thompstone and force a spillage. Henderson followed up and dived for the line, and Pascal Gauzère signalled a try. But a referral to the TMO clearly showed that Timoney’s pass to Cooney was forward.

Ulster had to survive a mini siege on their line, helped by Tom Youngs’s crooked throw, and the game turned Ulster’s way nearing the hour when Ben Youngs’s attempted offload went to ground and McCloskey deftly and cleverly scooped the ball off the floor to Burns, who found plenty of grass downfield.

From this lineout, McCloskey trucked it up, Reidy showed good footwork with a nice break and from this recycle Addison took Burns’s pass on the blindside and used their greater numbers to straighten through for a sharp finish. Cooney added the touchline conversion.

Addison nearly put Stockdale away for a third with a fine take and offload in one classy movement, and Lowry was held up over the line after Ulster brought on Dave Shanahan and switched Cooney to outhalf, from where his kick to the corner led to a lineout steal by Reidy. As the rain teemed down with even more force, compensation came by way of a Cooney penalty for offside, as Best decided that pushing Ulster three scores clear was preferable to a third try entering the last 10 minutes, even though Leicester by now looked like a busted flush.

Sure enough, Shanahan and Cooney worked a blindside overlap for Gilroy off turnover ball, and his run and chase earned another lineout on the 22. Their maul thundered toward the Leicester posts as first Best charged infield, as did Henderson, and off a Cooney carry the increasingly influential McCloskey flung a wristy long skip pass for Stockdale to score untouched. Cooney again converted.

The hitherto quiet Manu Tuilagi did show a glimpse of him at his rampaging best, slipping through Addison’s tackle to score from 30 metres out. This had its benefits for Ulster though, as it left both teams one try away from a bonus point, and in trying to run from deep, Tuilagi was hounded into a spillage.

But Ulster couldn’t convert two more attacking lineouts, and instead were indebted to Lowry stopping Olowofela in his tracks on half-way after the rangy winger broke clear from Ford’s cross kick.

A whacky endgame after a stultifying first half, but in the event it was job done for Ulster.