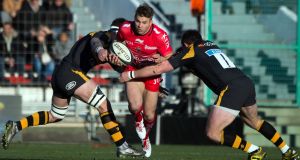 Wasps travelled to the lair of the most successful side in European club rugby and came within seconds of a dramatic victory. No side has ever beaten Toulon at the Stade Mayol in Europe. But for a Drew Mitchell try with the last play of the game, Wasps would have walked away from here with the distinction of being the first.

As it is, Toulon go into the final set of fixtures a point clear of Wasps, who must beat Leinster at home and hope Bath raise themselves against Toulon at the Rec if they are to top the group.

Heroic performances from Guy Thompson, who scored a late try that seemed to have won them the game, and Joe Simpson were just the highlights of a determined showing.

An explosive finish, but it built to it by degrees. The sides were separated at the break by a single try. It was the type a team of superstar individuals can pull off, instinctive and brilliant.

Wasps were looking dangerous when Elliot Daly forced a looping mispass, which Bryan Habana intercepted on his 22. In a flash the ball was away, whisked right, where Ma’a Nonu put Josua Tuisova away. He drew his man perfectly on the other 22 to send Quade Cooper to the tryline. The try capped an opening period dominated by Toulon muscle but spoilt by disjointedness.

The game grew ever more frantic in the second half and more blighted with carelessness. Cooper’s replacement, Freddie Michalak, even missed two penalties.

In between those, Jimmy Gopperth landed one successfully to pull within two points before Thompson had his moment. Daly tore through the outside-centre channel, and when he was stopped, Thompson burst through to score what looked like the decisive try.

Alas, Toulon were not done. They clicked when it mattered and Nonu slipped Mitchell through a hole to take the game. The pool’s destiny is by no means decided.

1 Pete Sampras: The forgotten great with the best serve in the business
2 Tipping Point: DeChambeau’s transformation raises questions, but who will ask them?
3 Super Rugby AU offers glimpse of rugby’s future if law changes are adopted
4 Cam Newton broke the mould: Can his flame be rekindled at the Patriots?
5 Mental clarity in chaos: Novak Djokovic, the man who turned two into three
Real news has value SUBSCRIBE