Three wins can set up a famous final four 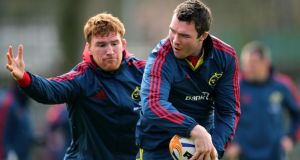 Peter O’Mahony’s inclusion in the Munster team is a huge bonus against Toulouse. Photograph: Cathal Noonan/Inpho

It is a measure of the Heineken Cup’s status that this quarter-final weekend is almost as pivotal in the story of the 2013-14 season as Ireland’s title-winning trek to Paris on the final weekend of the Six Nations three weeks ago. This is a bit more tribal, but come tomorrow evening circa 6.30 Irish time, there will be three Irish provinces standing or none at all, or somewhere in between, which will define the rest of their seasons.

Conceivably, Ulster and Leinster could secure home semi-finals at the Aviva three weeks’ hence, with Munster also ensuring a third mother of all semi-finals against Leinster to emulate the epics of 2006 and 2009, and with it a €2.4 million boost to the IRFU’s coffers and €20 million-plus to the Irish economy. That’s all that’s at stake then.

But therein lies the rub, for one could make a rationale argument as to why any or none of Leinster, Munster and Ulster could either progress or go out. The bookies make them all close, one-score games, with Munster and Ulster four and three point favourites at home to Munster and Saracens today, and Leinster four-point underdogs away to reigning champions Toulon tomorrow. By contrast, Clermont are ten point favourites to extend their winning run at the Stade Marcel Michelin to 75 matches today.

Whiff of novelty
This is only the second time in the Cup’s rich history that all three Irish sides are still standing at this juncture, and despite the repetitive nature of a competition which has arguably provided the best eight sides in the last eight, there is also a distinct whiff of novelty about this weekend’s match-ups.

Remarkably, the four-time champions Toulouse will be making their first ever visit to Thomond Park for today’s first quarter-final. This really should have happened before now. Indeed, despite the 1.30 kick-off, such is the rich sense of occasion for the 27,000 sell-out that you know they will be congregated well in advance and in full voice for the kick-off.

Helpfully too, Munster’s captain Peter O’Mahony has been passed fit, with James Downey also recalled in midfield, while the Toulouse ex-All Black outhalf Luke McAlister has been ruled out, as has monstrous tighthead Census Johnston.

Unrelenting performances
McAlister gives Toulouse a go-forward edge which Lionel Beauxis, for all his languid, golf-swinger’s kicking style, does not. But the selection of Joe Tekori and Yacouba Camara in the backrow strongly suggests that Guy Noves has opted to ape their unrelenting performances in winning away to Saracens and Connacht.

Indeed, even without Johnston, it’s probably still the biggest away pack ever to visit Thomond Park, and for all the talk of Toulouse only winning one away game in the Top 14 this season, they beat Saracens in Wembley as well as Connacht and Zebre away in the Heineken Cup, and they will also be hugely respectful of today’s sense of occasion.

“Regardless of where you play against the Irish, the atmosphere is great,” says the legendary Noves. “After the final in 2008, I remember we met dozens of Irish fans at Cardiff Airport, who were also taking a plane to go home. These guys gave us a guard of honour, applauding us off the bus and across the runway. It was a real life lesson!”

“They’ve been to plenty of hostile environments in their time,” admits Paul O’Connell, who evidently doesn’t think the prospect of visiting Thomond Park is especially intimidating for Toulouse. “It probably makes it a brilliant occasion for Munster and for the Munster supporters, and for the Heineken Cup itself . . .” O’Connell and Munster were curiously downbeat on their media day last Tuesday, but then so they were before they mugged Harlequins at the same stage a year ago.

Out-muscled
On this weekend a year ago Ulster were out-muscled by Saracens at Twickenham, their fourth defeat in five clashes with the London club, but this is their first knockout clash at the redeveloped Ravenhill

Saracens,England’s top team, bring a potent mix of work ethic, togetherness, big physicality and confidence, and a mix of South Africans and English internationals in an upbeat post-Six Nations mood. Against that Ruan Pienaar is back to start. ‘Nuff said.

Time was when Leinster were referred to as galacticos, but the label more easily fits with Toulon, whose selection features three World Cup winners in Jonny Wilkinson, Danie Rossouw and Juan Smith. Nonetheless Matt O’Connor, who has opted for the experienced pair of Shane Jennings and Jimmy Gopperth as well as recalling Cian Healy, Rhys Ruddock and Dave Kearney, has also been noticeably upbeat this week, and maintained the tone yesterday in citing his players’ big game experience.

“To quote a military term we are a ‘leaderful’ group. Our squad is full of guys who understand the psychology of cup rugby and like our opponents have been to the summit of this amazing competition and want to revisit it. Our leaders have guided us to three away wins in the group stages and mentally we are a very resilient team ready for the challenge that awaits us on Sunday.”

This weekend will not be interesting. It will be fascinating. Four home wins would be the likeliest outcome. Yet history also tells us that in all probability three home teams will progress which, depending on the identity of one away winner, could yet make this another stellar weekend for Irish rugby.