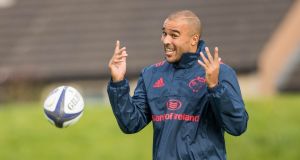 Simon Zebo returns to the Munster side and is one of five changes for the Champions Cup opener away to Castres on Sunday. Photograph: Morgan Treacy/Inpho

Munster coach Rassie Erasmus has made five changes to his side for Sunday’s Champions Cup opener away to Castres Olympique on Sunday (1pm Irish time).

Simon Zebo returns to the side at fullback to replace JJ Hanrahan and is one of three changes to the backline, with Darren Sweetnam named on the right wing and Rory Scannell restored to midfield joining Champions Cup debutant Chris Farrell.

Tyler Bleyendaal returns to outhalf after his outing in midfield last week and will partner Conor Murray.

In the forwards, newcomer secondrow Mark Flanagan makes his first start for the province and his Champions Cup debut.

Stephen Archer is introduced to the frontrow alongside Niall Scannell and Dave Kilcoyne.

Although the sides haven’t met since the 2011-12 season, this will be the 13th time these sides meet in Europe and in turn it becomes the most played fixture in the competition’s history.

1 Ireland v Scotland: Doris’ day as Caelan set for first cap
2 Gerry Thornley: Temple Carrig are the true schools rugby story of the season
3 In mourning Kobe Bryant mourn the bad as well as the good
4 Ashleigh Barty now living up to all her earlier promise
5 Owen Doyle: Breakdown of law and order in rugby must stop
Real news has value SUBSCRIBE