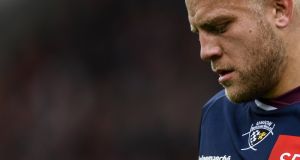 Saturday Northampton Saints v Castres Olympique, Franklin’s Gardens (1.0, live on Sky Sports)
Leinster supporters will be keeping an eye on this result as the province travels to Castres in the last round of pool matches. The Saints, abject in the tournament, have won their last three games in the Premiership. Castres, poor on the road, still have an outside chance of qualifying but that may end this afternoon. JJ Hanrahan is on the bench for the home side.

Wasps v Toulouse, Ricoh Arena (3.15, live on BT Sport)
Form would suggest a victory for the English club, who despite their controversial last-gasp defeat away to Connacht in round four, have excelled both domestically and in Europe this season. Irish international Martin Moore continues at tighthead prop. Toulouse beat Stade Francais in Paris in the Top 14 last weekend but the four-time European champions will be second favourites here.

Racing 92 v Leicester Tigers, Stade Yves-du-Manoir (7.45 Irish time, live on BT Sport)
The French side have made seven changes from the one humiliated in Paris by Munster last weekend in the refixed match, something that should be centre and front in their minds as they try to atone in front of their home supporters. Dubliner James Hart, linked with a move to Munster, is on the bench. The Tigers, minus the sacked Richard Cockerill, have Matthew Tait back after injury and with a chance of still qualifying have more to play for but have lost 10 of their last 11 away games against Top 14 opposition.

Scarlets v Saracens, Parc y Scarlets (1.0, live on Sky Sports)
If Saracens win they will break Munster’s record of 13 consecutive victories (2005-2007) in the Champions Cup but it won’t be easy. The Scarlets put it up to the defending European champions for large tranches of the game when they met earlier in the tournament. The Welsh club welcome back Tadhg Beirne from injury and the Irishman has been in superb form of late. The home side are capable of springing a surprise but will have to get everything right on the day.

Bordeaux-Begles v Clermont Auvergne, Stade Chaban-Delmas (1.0, Irish time, live on BT Sport)
Ian Madigan returns at outhalf for the home side to form a new halfback partnership with Baptiste Serin of whom great things are expected at international level. His clash with Morgan Parra will be instructive from that perspective. Games between these teams tend to be high scoring affairs. Ulster will be hoping for an away win to preserve their tenuous chances.

Toulon v Sale Sharks, Stade Felix Mayol (3.15, Irish time, live on BT Sport)
The last time the teams met at this venue in 2012, the French club won 62-0. They have met three times previously in Europe with Toulon scoring 94 points and conceding a paltry 11 against the English club. Both teams are much changed from last week’s domestic fare but based on the team sheets and current form anything other than a handsome home win would be a surprise.