Montpellier: a French side carved from South African muscle 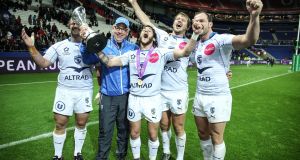 Last September it was announced that current Scotland coach Vern Cotter would take over from Montpellier coach Jake White for the 2017-18 season. In the subsequent divorce between White and Montpellier, there were perceived slights and cultural differences which White declined to address and which Montpellier refused to ignore.

Nine months before the end of this season White was effectively finished in the south of France, yet here he is with his dangerous team who have a chance to qualify for the knockout stages in Europe.

It didn’t matter that the South African had taken Montpellier to Challenge Cup victory last season and reached the semi-finals of the Top 14. His face no longer fitted, his team was not French enough, he played a South African style of rugby that was more effective than stylish, he was gruff and fatally he didn’t speak French.

Since Bernard Laporte became president of the French Rugby Federation (FFR) late last year, he has changed the laws regarding French eligibility. Laporte announced in December that France would stop selecting non-French players who had qualified under the three-year residency rule. Foreign-born players who currently play for France will remain eligible but new players will require a French passport.

The emergence of Montpellier as a rugby power was happenstance and occurred out of a sense of civic duty of one of its best-known citizens in 2011. Montpellier’s mayor reached out to its richest resident and asked him to ensure the survival of the financially struggling 29-year-old Hérault Rugby and so current owner Mohed Altrad, who had never been to a rugby match, stepped up to the plate and bought the squad.

This is where White finds himself: in a city where the owner has no rugby past or proven interest in the game other than owning the club.

Altrad’s history has been well documented. Born in the desert outside Raqqa in Syria, his birth was the result of the rape of his mother, who was no more than 13 years old. His elder brother was similarly conceived but allegedly killed by the maltreatment of their father, a Bedouin tribal leader.

The billionaire is single-minded and so is the coach. That’s the rub. During the summer the South African refused to pick François Trinh-Duc for his squad for the final match of the season because the French scrumhalf was leaving for Toulon. Trinh-Duc had been with Montpellier for 13 years.

Perhaps most damning of all was White’s appetite for the England job when it arose after their disastrous run in the Rugby World Cup in 2015. His interest in the job, which was subsequently given to Eddie Jones, was seen in the south of France as an act bordering on treachery.

In any event this season has been a solo run for the coach as his fate has been set even if Montpellier beat Leinster tonight and somehow qualify for the knockout stages of Europe.

Their win over Bordeaux Bègles last week moves them up to third in the Top 14 table, with former Springbok François Steyn kicking 16 points for the winners.

Prior to that, Montpellier’s run in the Top 14 has been respectable, if not startling. Before beating Bordeaux, White’s side lost to Section Paloise (Pau), beat Toulon and Grenoble and, going back to November, lost to Stade Français.

The RDS crowd may not get passion from White and his team. But that doesn’t mean the French side carved out of South African muscle should be approached with anything other than caution.