Saracens know time has come to show what they can do 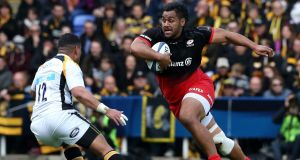 Billy Vunipola of Saracens charges upfield during their defeat of Wasps 24-17 in the Champions Cup semi-final. Photograph: David Rogers/Getty Images

It is nine years since an English club lifted Europe’s premier club trophy but Saracens sense their time approaching. On their previous final appearance in 2014 they bumped into a Toulon team of rare ability and experience and were taught a lesson in how to seize major European trophies.

Next month in Lyon they will be better equipped, in terms of both individual quality and collective resilience.

Those involved in the near misses of past seasons will feel blessed to run out alongside a young player who is emerging as a once-in-a-generation talent. Even his most seasoned team-mates struggle to recall a 21-year-old forward with a more precocious all-round game than Maro Itoje.

Long-serving Saracens hooker Schalk Brits, who has played with such second-row greats such as Victor Matfield and Bakkies Botha, is by no means an exception in regarding Itoje as “a special athlete” destined to improve further.

“He is the total package,” Brits said. “I shouldn’t say this but he’s already world-class. He will just grow every time he puts on the shirt. We just need to keep him healthy. There’s not a lot of players who are so mature at such a young age.”

“He [Itoje] has got the longest arms I have ever seen,” the winger said. “I don’t know how he does it. I was standing on the wing watching those arms go up, just stealing line-out after line-out. Players with that ability stick out like sore thumbs.”

Should Saracens win the final they will be the first champion team in the tournament’s history to progress through an entire campaign unbeaten.

Their clutch of English Grand Slam-winning players have all returned from the Six Nations with appetites keenly sharpened. “I don’t want to say it’s our time but we’ve definitely got the potential to win this one,” Brits said.

Ashton hopes the disappointment of the 2014 Toulon finale will be an extra stimulus. “I think you have to lose finals to finally win one. I just hope we’ve lost enough now.”

They remain in contention for the Premiership title but the game at Exeter this Sunday will be a test of stamina and resolve.

Should they meet Saracens again in the play-offs, it is hard to see them enjoying a different outcome unless they can keep Itoje quiet and take the attacking gambles that Saracens’ defence tend to thrive on. The charge-down of Jimmy Gopperth’s kick by Michael Rhodes and a second-half penalty try might imply Saracens were a touch lucky to win. In truth, had Owen Farrell been more accurate off the tee and Simon McIntyre seen red for his boot to the head of Itoje, Wasps could have lost by a bigger margin.

The organisers will also be relieved that enough fans turned up to create an atmosphere, although how many supporters will now follow them to Lyon remains unknown. In terms of bums on seats Saracens are hardly European giants, but on the field they have few peers.

Solskjær disappointed United ‘didn’t pounce’ on injury-hit Liverpool 19:59
Alisson denies Man United as Liverpool go four without a win 18:49
Mesut Özil confirms Arsenal exit as he moves to Fenerbahce 17:37
Here is your handy guide to sport on television this week 17:01
Dreal Deal steps up again at Punchestown despite alarming drift in price 16:37
Crossword Get access to over 6,000 interactive crosswords