After trailing 23-7 at half-time, Foley’s side win it at death through Keatley’s boot 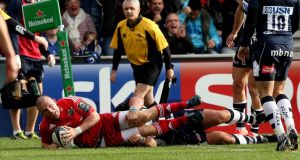 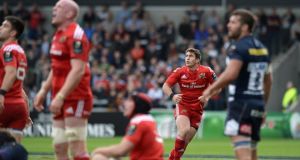 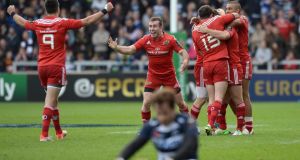 Some things never change. The European rugby landscape is new uncharted territory but Munster still know how the game works and how to dig out a win against all the odds.

Anthony Foley’s side were outplayed in the first half, save for a Dave Kilcoyne try, and the 23-7 deficit, if anything, was kind. However, a trademark fightback after the break saw them inch their way back into things with tries from Andrew Conway and Conor Murray before Ian Keatley’s drop-goal with the last kick of the game saw them take home four precious points from their Champions Cup Pool One opener.

Sharks brought in 20-year-old Mike Haley at fullback for his first appearance of the season in place of the injured Luke McLean and he was prominent early on as the home side settled quickly. Danny Cipriani opened the scoring with a seventh-minute penalty but the lead lasted just three minutes as Munster showed their strength.

Keatley’s cut-out pass released Simon Zebo and his clever kick-ahead set up the position for a series of mauls which eventually resulted in prop Kilcoyne burrowing his way over for the game’s first try. Keatley’s conversion put his side into a 7-3 lead and a couple of barnstorming runs from CJ Stander kept the visitors in the driving seat until Cipriani began to take centre stage.

He kicked a second penalty, awarded by referee Mathieu Raynal in his last act before being helped off with a knee injury on 15 minutes, and then audaciously, with the stiff breeze behind him, landed a third from two metres inside his own half after replacement referee Laurent Cardona pulled up the Munster forwards for collapsing a maul.

With a 9-7 advantage, Cipriani decided it was time to go on the attack and his decision to turn down another shot at goal paid off when veteran forward Magnus Lund, the only survivor from Sale’s 27-13 European Cup win over Munster at Edgeley Park in 2005, finished off a sustained spell of pressure on the Munster line by forcing his way over at the corner.

Cipriani kicked the touchline conversion to make it 16-7, and it got even better for the Sharks when a break from Haley dragged the Munster defence out of position and centre Johnny Leota took advantage to dummy his way over for a second try which silenced the red half of the AJ Bell Stadium.

Cipriani maintained his accuracy with the conversion to extend his side’s lead to 23-7 and Munster finished the first half with 14 men when flanker Tommy O’Donnell was sin-binned for pulling back Tom Arscott as he supported a break by Cipriani.

Sale’s pleas for a penalty try were turned away but they went in at the break with a 16-point lead.

The angry look on Foley’s face as he marched down the tunnel told its own story, and the Irish side played with more purpose and intent at the start of the second half.

Conway, on his European debut, dropped fullback Felix Jones’s pass on 55 minutes but moments later made amends when he crossed wide out. Keatley added the conversion to cut the deficit to nine points.

With all the momentum, Munster thought they had scored again on the hour when the busy Murray forced his way to the line but was prevented from touching down by Sale wing Tom Brady.

Murray was not to be denied, however, as he burrowed his way over at the other corner after another strong burst from Stander and Keatley’s third goal cut the gap to just two points.

Cipriani and Keatley then traded penalties before Munster mounted one last push for victory, and Keatley came up with the winner to the delight of the thousands of Irish fans.