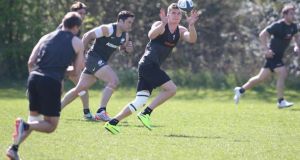 Owen Farrell during a Saracens training session in St Albans ahead of their European Champions Cup clash against Clermont Auvergne. The outhalf is back in the squad after three months out. Photograph: David Rogers/Getty Images

Saracens humbled Clermont 46-6 at the same knock-out stage last season, scoring six tries during a Twickenham romp – but their opponents’ quarter-final demolition of reigning Aviva Premiership champions Northampton just two weeks ago suggests McCall’s men are up against it.

“It’s going to be a tough game for us, we understand that,” rugby director McCall said. “But we are going to try to make life very difficult for them and put them under some pressure.

“We always say we just want to give ourselves a chance of winning every competition, and they do that year in, year out. They respond to big setbacks remarkably well.

Farrell will be on the bench, but injury sidelines skipper Alistair Hargreaves, so Jim Hamilton replaces him at lock and England centre Brad Barritt takes over captaincy duties. There is also a start in the backrow for exciting prospect Maro Itoje, while flanker Jacques Burger is back from suspension.

Saturday’s encounter is a 41,000 sell-out, with the overwhelming majority of supporters heading 100 miles south from Clermont.

Saracens, though, possess enough European experience not to be troubled by such a partisan atmosphere and have already beaten Clermont during the pool stage, defeating them 30-23 at Allianz Park last October before Clermont won the return fixture three months later.

Clermont are bidding to book a second European final appearance in three seasons, but they have yet to conquer the competition and land silverware.

“I would like the colours of Clermont to hang from the trophy this season and to win it with my friends. The more we advance in a career, the less opportunities there are.”