Munster show up this time and take home a Christmas bonus 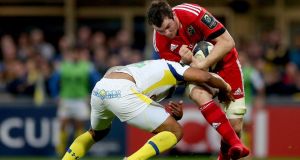 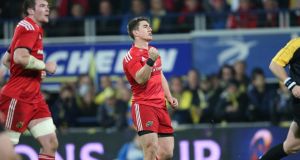 Regrets they’ll have a few after suffering their first back-to-back defeats but there was no shame in Munster’s defeat to a Clermont team in vintage form at their Stade Michelin fortress, and more credibility to be taken from this bonus point than last week.

After a bright, positive start that should have yielded more than a six-point lead, Munster were stung by a brace of classically gallic/Clermont, off the cuff tries – the second on half-time – and their set-pieces creaked in the second half as they tackled, scrambled and clung on for dear life until striking stealthily for a bonus point that was both unlikely and potentially invaluable.

Their scrum stood up manfully at the outset before eventually being worn down, and at times their scramble defence barely kept them alive as Camille Lopez pulled the strings, Wesley Fofana and Aurelien Rougerie (who had a huge game) probed, and Clermont comfortable from one to XV on the ball, ran hard onto the ball and tested the red line to its limits.

One marked difference between the sides was that whereas Munster usually kicked away turnover ball, Clermont ran with it; added to which was the home side’s willingness to run from quick throws. As Munster were reminded to their cost, it was no use kicking the ball off the pitch; it had to be kicked into the stands.

A good start was vital for Munster, unlike a repeat a week earlier. Talking to Mike Prendergast, the Grenoble defence coach, he said the key to his side getting to within four points of them earlier this season was tearing into Clermont from the start.

In winning 83 of their last 85 matches at this venue, away teams tend not to do that. No doubt Anthony Foley sounded out his former team-mate and in any event Munster took heed. The selection of JJ Hanrahan was vindicated from the start as Munster varied the point of attack more in the first 10 minutes than they did in the entire 80 last week.

A fired up Tommy O’Donnell seemed to be everywhere, and he and Felix Jones were quick to earn penalties with good poaches – Keatley wasting the first with a poor cross kick but nonchantly landing a 50-metre plus penalty with plenty to spare.

Munster probed some more, going wide to Simon Zebo and then back across to the right for Hanrahan to cut through, and then carrying strongly two rucks later to within metres of the line. A try looked certain but Rougerie made a good read to nail Keatley; albeit at the concession of a scrum for a knock-on from which Thomas Domingo was penalised for boring in and Keatley made it 6-0.

Despite the big screen three times showing a mild late block by Jones on Noa Nakaitaci to roars from a typically panto-like French crowd, Nigel Owens was utterly unmoved. Keatley then looped around Jones to make another incision without reward.

Suddenly Clermont came alive. It began in broken play, when Lopez lined up BJ Botha and gathered his own chip ahead to link with Domingo, who was unceremoniously stopped by Paul O’Connell’s big hit. Rougerie released Benjamin Kayser, whose pass was picked off by Jones to prevent one of the tries of the season but still Clermont came in waves. Fofana worked the ball brilliantly to Domingo who popped it to Morgan Parra and from a close-in recycle Damien Chouly reached over Botha’s tackle to score. After lengthy recourse to his TMO Derek Bevan, Owens eventually awarded the try. There would have been a riot if he hadn’t.

However, in the first minute of a brief spell as a temporary replacement for CJ Stander, Robin Copeland was penalised for first holding onto the ball and then holding on after the tackle for Lopez to push Clermont in front. Nearing half-time, a long-range Parra penalty fell well short, but although Andrew Conway found a lengthy touch inside the opposition half-way, Nick Abendanon quickly fired the ball infield.

Rougerie broke clean through only to be tackled by Jones for Keatley to dive on the pass infield, but again Zebo found touch but not the stands and again Abendanon threw infield to Fritz Lee. He found Nakaitaci, who stepped inside Keatley and Conway before scoring, and the home team skipped off leading 15-6 to thunderous acclaim.

Munster regrouped, even coming out ahead of Clermont for a quick warm-up, and when Kayser was off his feet Keatley made it a one-score game. Conor Murray’s touchfinder from the restart found the stands – Munster had learned a costly lesson – but from a Dave Foley intercept, Murray box-kicked the turnover into space only for it to bounce up kindly for Nakaitaci. Again Clermont countered through Abendanon, Rougerie and Lopez, and when the latter chipped Jones the fullback’s late challenge resulted in a yellow card as well as a Lopez three-pointer.

Munster managed the ensuing 10 minutes well to keep it scoreless. A big Clermont scrum against seven men (O’Donnell went to the wing and Zebo to fullback) was wasted by Lopez missing the penalty, but he made amends from a turnover penalty to make it 21-9, and a big break by Lee and offload to Sébastien Vahaamahina had Munster indebted to double tackles by O’Donnell and Jones, and then Zebo and Conway, before Lee fumbled from the recycle with a four-man overlap.

There was a costly lost lineout from a slight overthrow by Duncan Casey, and a couple of superbly defended mauls but Clermont’s scrum yielded another penalty for Fofana to made inroads off a midfield switch and although Munster withstood the waves, they were sucked in sufficiently for Chouly to score his second try off a pinpoint Lopez crosskick.

Casey revived Munster spirits when charging off the line to intercept a Lee pass and score, Keatley converting and then secured the bonus point after they worked Conway into the line and Lee was culpable again when he went off his feet. Remarkable really.