Munster must adjust as Allianz Park poses own challenges 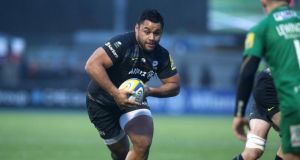 Billy Vunipola of Saracens. Vunipola will be one of Munster’s main challenges when they face Saracens at Allianz Park. Photograph: David Rogers/Getty Images

“They are demanding . . . not necessarily demanding of the finest rugby skills but they are demanding of passion . . . They want to see you wear your heart on your sleeve.” Sound familiar? Gloucester legend backrower Andy Hazell was very clear when answering what the crowd want prior to his team’s engagement with the high flying Saracens last Friday.

Last week, as suggested, I watched Gloucester entertain Saracens in the Aviva Premiership. Gloucester won by 24 points to 23, with outhalf James Hook converting an 81st minute penalty from 52 metres. It was the last kick, at the death; does this also sound familiar?

As Ireland gets battered by the storm Munster will no doubt be adjusting their preparations, but they will also need to adjust to the Allianz Park’s artificial surface. In the era of entertainment, it won’t be long before this type of pitch is ubiquitous, as audiences hunt for more tries. And herein lies the challenge for Munster: how to outscore Saracens on their artificial pitch?

He who plays at 10 plays the Saracens tune. I’ve long been a huge fan of the injured Charlie Hodgson, especially at this level. I struggle to understand England’s stock in Owen Farrell, whose possible injury may leave fullback Alex Goode at 10 for the third time in 12 months. Inside, Richard Wigglesworth has many attributes, but he’s a brilliant box kicking scrumhalf; lots of aerial bombs will be raining down on Munster wingers.

Further inside again, what a clash awaits Munster’s number 8, with Billy Vunipola waiting to beat defenders, make yards and tackles. Considering his body shape, he provides unreal activity. I’m not sure there’s a better standing start tackle breaker in the competition either. For Munster’s starting number 7, this means a crap Saracens scrum and poor pick up is no guarantee that Vunipola will be tackled. It also means Wigglesworth has a ready go to off of any ruck ball.

However, Billy and his brother at loose head Mako have the softest hands in the premiership; so subtle they can really catch out a defence intent on a big hit and not anticipating the pass. This is especially important as both will feed off of a wider ball, typically outside the first back receiver. Eager defenders must second guess their soft offloads, especially with the likes of David Strettle and Chris Ashton loitering from blind corners on the false, fast pitch.

So I imagine that Munster will match up a likeminded body to mark Vunipola or Ian Keatley will be making a lot of heavy tackles. Although Jacques Burger is a wrecking ball at open side, his impact is minimal where the Vunipola’s contribution is greatest; making the hit/tackle, before immediately disengaging to pounce for a legal steal. Tommy O’Donnell simply can’t negate this himself, so all red jerseys are key.

Conor Murray must vary the game constantly, knocking Saracens out of their rhythm; box kicking off quick turnover to expose blind side wingers out of position, attacking the blind side and getting Munster forwards carrying through the ruck, or at least hitting the gainline asap.

Of utmost importance is Munster’s offloading game. Ambition to create that first hole is important but Saracens have an immense defence and pace throughout. They tend to completely abandon the breakdown contest to err on the side of a full pitch. Here, Munster must attack, not necessarily around the fringes but through the ruck to honeypot more Saracens. When not attacking through the ruck they need to figure out how to circumnavigate the aggressive Saracens swinging gate defence, or how to get outside it.

JJ Hanrahan is a first centre who has the skillset and ambition to aid this outcome; not to mention a crucial wider kicking game. Saracens continuously back their line speed and tackle technique around man and ball hits; Argentine centre Marcelo Bosch provides deft offloads. Running blind lines from Simon Zebo et al could unlock this defence.

Last Friday, Gloucester’s first instinct was to kick; understandable after having lost three at home, not to mention the sticky pitch. However, Munster must win on a faster pitch; kicking will not be enough. Saracens’ midfield defence is their key, one which Munster must negotiate.

Munster’s big wins have come from them raising their game, allied with gainline rugby with violent clear-outs. Gloucester looked good at individual breaks, but on multi-phase tended to over and back. This split their attack and number advantage, allowing Saracens to work less to stay in shape. Conversely, even with a new outhalf, Saracens are much more focused on keeping the flow going the same way, looking for blind wingers to change the angle.

In many ways, monster Jim Hamilton is Saracens’ lineout, but they also use his height to get his partner George Kruis (suspended for this game) into the air. Hamilton does cover ground in lineouts but is terribly slow when moving into the air. From a vertical launch he’s tough to compete with, given his bulk and length. However, in the absence of Steve Borthwick their lineout has faded, especially defensively, where they are slow over the ground.

Munster’s speed and options should target pace and space in around Hamilton, who can get in his own way. Ironically, considering the fast pitch, Saracens have a superb lineout maul and employ it at will to launch box kicks, dictate pace and momentum , as well as starving the opposition of energy and getting tries close in.

Saracens place Hamilton at its front and when the Vunipolas pile in they are especially powerful. Hamilton’s individual battle with the Munster pack will be fascinating in and of itself!

Not losing is one thing but winning for Munster on this pitch is another. Clever kicking is crucial but Munster can learn from Gloucester’s second try; sub scrumhalf Callum Braley fielded deep inside his 22, finding winger Jonny May. who popped the ball between teammates before it found its way back to Braley to touchdown under the posts. The sequence demonstrated what was necessary; hard running lines and clever offloads, simple passing. Low error rugby with buckets of passion, pace and punch.