Ulster bow out of Europe with a whimper against Bordeaux 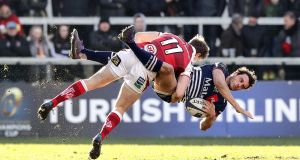 The crisis at Ulster shows no signs of abating after they meekly bowed out of the European Champions Cup in defeat in the Pool Five ‘dead rubber’ clash with Bordeaux-Begles.

This reverse was Ulster’s ninth in 13 games and heaps huge pressure on Les Kiss as he now prepares for a return to Pro12 action next month while the province also ended up bottom of Pool Five which represents their worst finish in Europe since 2008.

Even though they outscored a much-changed Bordeaux line-up by three tries to two - skipper Andrew Trimble, Cardiff-bound Franco van der Merwe and Darren Cave all got over - the Ulster performance was riddled with errors from start to finish and the side played like a team lacking belief and confidence.

Ireland trio Rory Best, Iain Henderson and Paddy Jackson - the latter kicking nine points but, crucially missing a 53rd minute penalty - all stepped up but they too succumbed to mistakes and Ulster’s failure to score any points during Geoffrey Cros’ sin-binning was also pivotal to their bonus point defeat.

They also only managed to take the lead in the 57th minute and that only lasted until the 70th as simply couldn’t close this out in what was a crucial game for Ulster’s already damaged morale.

It didn’t augur well that Dave Shanahan knocked on from the first breakdown, after Ulster had taken the kick-off nor indeed that Paddy Jackson was then pinged for not rolling away which allowed Ian Madigan open Bordeaux’s account with a penalty and just over a minute played.

That set the early tone and Ulster found themselves bottled up and bullied with the ultimate expression of Bordeaux’s dominance coming when scrum-half Yann Lesgourgues emptied the unfortunate Shanahan off the back of an Ulster scrum inside their 22, picked up the ball and then held off Jackson to score.

Madigan’s conversion made it 10-0 with only 14 minutes played.

Ulster roused themselves, though, and after Jackson opted to put a penalty into the corner, they mauled to Bordeaux’s line before moving right and left with Jackson giving Trimble the scoring pass in the corner.

The out-half, though, couldn’t manage the conversion.

It was hardly surprising that Bordeaux scored next and not long after Geoffrey Cros had scythed through, Bordeaux managed to embarrassingly shunt the home side off their own feed at a scrum near their line with number eight Marco Tauleigne being awarded the try through the TMO.

Madigan converted and Bordeaux led 17-5. Again, though, Ulster managed to find a response and, after Tom Palmer was penalised for a dangerous tackle, the home side’s maul paved the way for Cardiff-bound Franco van der Merwe to score on the other side of the field.

This time Jackson converted to bring Ulster to within five points only for Madigan to strike a long range effort just past the half hour to push Bordeaux into a 20-12 lead.

Ulster then butchered two scoring chances with the second coming on half-time after Jackson was held just short by Cros. However, Kiss’ men did get a return as Jackson then nailed the subsequent penalty and Cros was shown yellow for not releasing him which allowed Ulster close it back 20-15 at the break.

Ulster then failed to score during Cros’s binning and then, on 53 minutes, Jackson was wide with a straightforward looking penalty.

Just before the hour, Ulster finally took the lead when Darren Cave grounded the ball against the foot of the post after some sustained pressure with Jackson’s conversion edging the home side in front by 22-20.

Their lead lasted 13 minutes before a high tackle by Stuart McCloskey on Jean-Baptiste Dubie ended in a penalty which replacement Simon Hickey converted to put Bordeaux ahead by 23-22 and he was on hand again to land another with seven minutes left which is how it ended.

Not used: J Andrew, B Herron