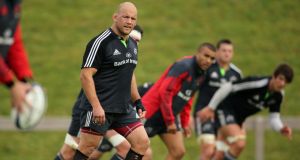 Munster coach Anthony Foley has made just two changes to the side the narrowly beat Sale Sharks last weekend, ahead of Friday’s meeting with Saracens (7.45pm).

After making an impact coming off the bench together early in the second half at the AJ Bell Stadium, props James Cronin and BJ Botha come in at loosehead and tighthead respectively.

They replace David Kilcoyne, a try scorer against Sale, and Stephen Archer, who both take their places among the replacements.

Otherwise, it’s as you were for Foley’s men, with Dave Foley set to partner Paul O’Connell again, in the week of his first call up to an Ireland squad.

In the backrow, Peter O’Mahony captains the side from six, with Tommy O’Donnell at seven and CJ Stander at number eight, after his excellent man-of-the-match performance against Sale.

Saracens stand out performer in the 30-23 win over Clermont Auvergne was Charlie Hodgson, but he has been dropped for the physical presence of incumbent England number 10 Owen Farrell, who will partner Neil de Kock in the halfbacks.

Marcelo Bosch replaces Chris Wyles at outside centre, while up front, lock Alistair Hargreaves, is ruled out with a “slight knock” and Jim Hamilton is named instead.

1 Owen Doyle: Creeping professionalism of schools rugby a threat to the game
2 Champions Cup: Leinster will meet Saracens on Saturday evening
3 GAA officials and referees brace themselves as new rules kick in, and this time it's for real
4 Ole Gunnar Solskjær insists he is up to the challenge at United
5 Coco Gauff pulls off biggest shock yet by beating Naomi Osaka
Real news has value SUBSCRIBE