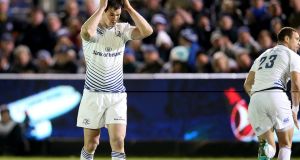 Jonathan Sexton reacts after Leinster lose their lineout in the final stages of the Champions Cup game against Bath at The Recreation Ground. Photograph: Dan Sheridan/Inpho

New Leinster coach Leo Cullen has asked supporters to remain patient with his side despite a second Champions Cup defeat in a week.

Crushed 33-6 at home by Pool Five opponents Wasps last Sunday, Leinster have now lost their opening two games of a European campaign for the first time since 1996 following a 19-16 reverse at The Recreation Ground.

And with holders Toulon – next up in the December double-header – also in the toughest group of this season’s tournament, Leinster are already struggling to progress.

“There was a bit of flak after last weekend, but we certainly got a better performance today. They showed a good bit of steel and desire, the way they fought back into the game.

“After getting back to 16-16, I thought we looked the stronger team at that stage,”

Johnny Sexton had a chance to give Leinster the lead with the scores level, only for his on-target effort to fall short of the posts.

His Bath counterpart George Ford then took his opportunity to seal the game for the English side with just three minutes remaining.

“People need to stay patient with us. There were a lot of good things out there, but unfortunately, we didn’t get the result,” added Cullen.

“It is going to be tough. We just need to park Europe for the next couple of weeks, and try to get a bit more confidence in the Pro 12.”

“We were in control of the game, but we stupidly did things that let them back in. We then got to 19-16 and we did it again, but luckily Stuart (Hooper) nicked that last lineout for us.

“I am pleased we won against a Leinster side full of internationals. Our scrum was awesome – Henry Thomas and Nick Auterac were outstanding – but we can’t afford to give teams easy outs and chances to score points like we did today.

“We got lucky today in terms of the end of the game when Stuart won that lineout.

“They (Leinster) are always dangerous when they have got Johnny Sexton kicking his goals.

“I said at half-time we needed to be more patient. We lost the ball too many times when we had good attacking positions through not being patient. If we had played Toulon today, we probably lose.”