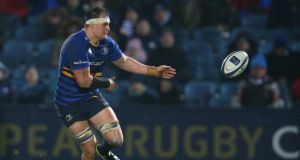 Leinster’s Rhys Ruddock has been selected to partner Devon Toner at secondrow for the trip to the Ricoh Arena in Coventry. Photograph: Billy Stickland/Inpho

It’s a Leinster team drawn in the image of both Joe Schmidt and Leo Cullen and maybe shaped for Ireland’s opening match against Wales in the Six Nations Championship.

Those players that need rest take it and those that need game time play in the last, weary match of this season’s European Champions Cup for the province.

Johnny Sexton, who was named as one of the vice-captains at the beginning of the season, captains for the first time in his 100th start for Leinster.

That means the barking commands from the pivot, a regular aspect of all matches, carries an official tag this week.

It seems a natural fit for the outhalf, who is desperate to rekindle his A game over the next week or so.

Cullen has made 11 changes from last week’s line-up of tyros, who went out with vim and brio, took the game to Bath and won it.

To that positive backdrop, centre Garry Ringrose is rested. Proper order after last week’s physical game, where he was in the thick of some heavy hits.

There were lessons there to be learned by some of this week’s old stagers and the mood now seesaws back to high pre-match expectations for today’s more experienced crew.

The Kearneys, Rob at fullback and Dave on the wing, are possible starters against Wales, Jack McGrath too and Marty “will he stay or will he go” Moore at tighthead. Today gives him a close up of the team he may enjoy next season if numbers and contracts cannot be crunched by the IRFU and Leinster.

Luke Fitzgerald runs out at 13, while Darren Cave plays there for Ulster, as another of Schmidt’s centre picks, Stuart McCloskey, is rested for the weekend.

Rhys Ruddock interestingly moves into the secondrow with Devin Toner as his partner, with Jamie Heaslip, Dominic Ryan and Jordi Murphy completing the backrow and the impressive Josh van der Flier eager to skip off the bench.

Leinster spoke of winning and momentum last week, then fielded a young side that got the crowd to their feet in the RDS, which goes to show that what is said for public consumption and what is done can be two entirely different animals.

Two Leinster old boys Jimmy Gopperth at outhalf and Brendan Macken in the centre, start for Wasps, while England’s Joe Launchbury returns to partner Bradley Davies in the secondrow.

Ruddock’s mobility there is likely to have been a factor in moving him from blindside flanker, where he started last week against Bath.

James Haskell also returns to the Wasps backrow as team captain alongside Sam Jones and openside George Smith, a sizeable challenge for Murphy and Ryan, who Schmidt overlooked for his Ireland squad.

“There’s a European quarter-final at stake on Saturday and I’m sure Leinster will want to come and spoil the party,” said Wasps coach Dai Young.

“They were pretty upset after we won in Dublin and I’m sure they will come here wanting to put the record straight. We know we are playing against a wounded animal and you don’t win three European titles by accident.”

Wasps have plenty of pace in their own backline, with Charles Piutau at fullback and Frank Halai on the left wing. The first-round meeting between the teams ended with the TMO confirming that man-of-the-match Piutau had scored in the right corner after Sailosi Tagicakibau had touched down inches short.