Leinster are almost Ireland in disguise – except for Sexton, Murray and victories 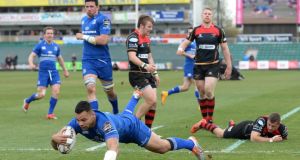 Ben Te’o scores one of his two tries against the Dragons. The New Zealand-born centre’s should be key part of a stronger Leinster outfit next season. Photograph: Ian Cooks/Inpho

Matt O’Connor might not be the most popular coach that has strode the RDS turf. But is his Leinster team essentially Joe Schmidt’s Ireland minus the wins?

Twitter, Facebook and the more opinionated parts of the internet can sometimes rightly be regarded as somewhat of a shouty echo chamber. But the role of the online world is increasing.

While in some cases this means a series of tweets will be dressed up as an “article”, there are more considered views. Jeff Pagano of Leinster fansite HarpinOnRugby previewed Leinster’s quarter-final against Bath for the most recent copy of In Touch, the IRFU’s self-published digital magazine. The Whiff of Cordite rugby blog has been around for a few years now, steadily expanding its reach, and then there is the Demented Mole.

The Mole, as yet unmasked, deals in what in the trade one would call long form; strolling epics for leisurely perusal published at somewhat irregular intervals. Low on hype, high on quality, his latest spotlight is shone upon the Matt O’Connor era at Leinster. It’s an excellent read. Suffice to say, his view of the Australian’s time in charge is not one filled with a rounded positivity.

It might seem odd to somebody peering in from outside Leinster’s 12 counties that the coach is under pressure. A Pro12 title last season, his first in charge, and in his second season his team has reached the last four of the European Champions Cup. Leinster fans, are you not entertained?

Unfortunately for Leinster, Jimmy Gopperth is not Jonathan Sexton and whoever is named at nine is not Conor Murray. While ruck dominance and player discipline are good qualities to share with Ireland, one of the key tenets of the Schmidt game plan is precision open-field kicking, something sorely lacking at times this season at Leinster, especially in recent weeks.

And fifth place in the league is a problem. A very big problem. The seeding rules for the Champions Cup mean that should Leinster finish fifth, a third seed awaits; fourth seeds if they drop to sixth. Either way, a pool of death such as Munster endured this season becomes ever more likely.

Not yet mathematically eliminated from the semi-finals, Leinster representatives will join the top-four Pro12 sides at Ravenhill this afternoon for a press event, part of the build up to the league’s first “showpiece” final, before returning to Belfast again on Friday week.

That game’s scheduling, combined with Sunday’s Toulon contest, has some practical concerns. Tiredness, obviously. And if a Leinster player were to get a head knock on Sunday that required them to go through the graduated return-to-play protocols, they would be automatically ruled out of that Ulster encounter. No debate, no fudging. There just aren’t enough days between the games for a player to clear all stages.

Disparity While extra rest for a suspected brain injury is no bad thing, such a scheduling disparity is not ideal. But complaining about two away fixtures in six days at the season’s sharp end won’t garner much sympathy after seven league defeats.

Two sides had doubles over Leinster this season; Munster and the Dragons. The last time Leinster permitted that was in 2003/04 when three sides did it: Munster, Edinburgh and the Celtic Warriors in their only Celtic League season.

As pointed out by Pagano, in every game Leinster have failed to win this season (apart from the two Munster defeats) O’Connor’s side had led at some point in the second half. In 10 Pro 12 and European contests Leinster have fought to gain or sustain a second-half lead, only to end up surrendering it. The great teams don’t permit that. They shut you down.

One or two of these might hint at bad luck; 10 spells out a problem. Part of this is down to Leinster’s poor first-half scoring. Leinster are top scorers in the Pro12 from minutes 40 to 60 but of the top nine sides in the league only Connacht have had a worse cumulative first-half points difference. Small leads are more easily overcome.

Whether Leinster win or lose on Sunday there will be some who just want O’Connor out, third year on the contract be damned. There’s nothing he can do about that. Except win it all, perhaps.

Man United could stop Bruno Fernandes from playing for Portugal in March 09:31
Another stalemate for Man United; Robbie Henshaw leading the way for Ireland 07:54
Continued absence of anti-doping tests for GAA intercounty elite 06:44
Irish contribution to Ali-Frazier bout that brought the planet shuddering to a halt 06:00
Her Sport putting women’s sport firmly centre stage 06:44
Crossword Get access to over 6,000 interactive crosswords