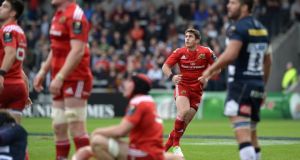 A goal-kicker’s lot is different. His job spec affords him even more responsibility than a striker in football. Nor is it quite as unique as, say, a goalkeeper, besides which a latter’s goalkicks merely restart a game. It’s almost impossible to miss a pitch, whereas there’s rather less margin for error trying to bisect a pair of posts.

No, the unique pressures and demands placed on a goal-kicker are altogether more acute.

Of course, he is as much of a team man as anybody else, yet at times – ie addressing a conversion or a penalty – he virtually becomes an individual sportsman, a la a tennis player or golfer, in a team setting.

For those minutes, not only has the game completely stopped, but all eyes and cameras are on him. The silence nowadays afforded goal-kickers somehow seems only to magnitude their solitary existence at that juncture.

The responsibility also requires a specific temperament. There almost has to be something of a glory hunter about a player who assumes the role, and maybe something of a masochist as well; a la Ronan O’Gara or Jonny Wilkinson, who were driven if tortured souls. They cannot land every kick, and for all the glory that comes with match-winning kicks, each of them has to be haunted by past failures.

Then there is the pressure that comes with a match-deciding kick, be it off the ‘t’ or a drop goal. No outhalf relished this role more than O’Gara, intensely consumed as he was (in part by past misses) to continually perfect his technique.

And cometh the 80th minute or beyond, he relished it even more, and such was Munster’s and Ireland’s reliance on him, no-one delivered more.

Watching each and every one of the Munster squad embrace him after the full-time whistle (notably captain Peter O’Mahony) it was hard to believe Keatley had ever felt better in that red number 10 jersey. All the practice, pain and pressures were worth it in those moments.

Truly decent bloke that he is, Keatley thanked his team-mates; and rightfully so. Such match-winning drives truly are a team effort. But come the moment when he stepped into the pocket, the responsibility was all his, and he delivered in some style. His punch into the air was the weekend’s defining moment.

Nor, critically, would Munster have been within two points of Sale had Keatley not previously landed four kicks out of four, notably the conversion to Conor Murray’s try from the right hand touchline in what was a very tricky wind.

Munster, the masters in Houdini-like escapes, had done it again, and a la the All Blacks against Australia, so the baton has been passed on once more. When it’s in your DNA, it’s in your DNA. Anthony Foley’s continuing faith in Keatley (after Rob Penney and Simon Mannix) has been vindicated.

Not many would have criticised the Munster coaches had they opted for JJ Hanrahan as first-choice outhalf, all the more so after his own match-winning try in the overtime win away to Perpignan last season. The 22-year-old from Currow is a rare talent who was the star turn for Ireland in the 2012 Under-20 World Cup.

Nevertheless, a bit like Ian Madigan with Leinster, while ideally you’d like to see Hanrahan performing at 10, one way or another you want to see him on the pitch. Munster had serious defensive issues in midfield, while admittedly they finally began holding onto the ball in the second-half, but for the umpteenth time after his introduction, Munster were an altogether slicker team with the ball when Hanrahan was in the mix.

But he is starting only his second season as Munster’s first-choice outhalf and this was only his 12th Heineken/Champions Cup start. More than any position, an outhalf needs games and time and experience to mature into the role.

The likes of Wilkinson and Dan Carter, who burst onto the international scene at a young age, are comparatively rare.

As O’Gara himself said last week, an outhalf could need 40-odds Tests to play to his full potential, and when you think of O’Gara, David Humphreys and Eric Elwood, they all played their best rugby in their late 20s and 30s.

Ulster are making that investment in the 22-year-old Paddy Jackson and it is already bearing fruit, although had he landed an early penalty at Welford Road and had his conversion to Franco van der Merwe’s try not been charged down, Ulster could conceivably have been two points behind rather than seven entering the endgame. Ifs, buts and maybes, perhaps, and Jackson will no doubt have his 80th minute moments too.

Proof, were it needed, that aside from being the most vainglorious if masochistic member of the team, the goal-kicker also remains the most important.