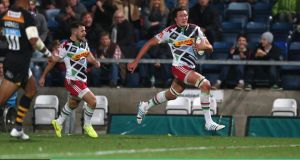 Harlequins deservedly beat local rivals Wasps 23-16 at Adams Park to go joint top of Pool 2 of the European Champions Cup. The win gives them eight points to join Leinster on that figure and the two meetings between these sides in December is likely to decide the destiny of the Pool.

Harlequins were the better side throughout and should have won more comfortably. They were far more creative in attack with their points coming from a try by the lively Charlie Matthews and a penalty try award with Nick Evans kicking three penalties and two conversions.

Wasps competed strongly but too many of their key players failed to have any influence on the game. Powerful runners, Nathan Hughes and Ashley Johnson were largely anonymous with star wing, Christian Wade, given no opportunity at all. Joe Simpson provided their only spark by scoring an excellent individual try which Andy Goode converted to add to his three penalties.

Wasps were without their captain, James Haskell, who was still recovering from a virus. Sam Jones was included on the flank with Tom Varndell recalled in place of Sailosi Tagicakibau.

Harlequins originally made one change from last week’s win over Castres with Kyle Sinckler replacing Will Collier at tighthead but they were forced into another when their skipper, Joe Marler, was a late withdrawal with a leg injury so Mark Lambert was called into the line-up. Chris Robshaw took on the captaincy.

Quins made a bad start when Marland Yarde fumbled the kick-off but they recovered to push the hosts off their own ball at the resulting scrum. The first 10 minutes were evenly contested before Evans took the first chance for points by kicking a penalty.

Wasps also had their opportunities but declined to take two kickable penalties in favour of more attacking options. Their decision to do so proved fruitless as the home side carelessly lost a line-out and a scrum. When the third opportunity came,

Wasps went for the posts and Goode succeeded with a penalty but this was soon nullified by one from Evans to give Quins a 6-3 lead at the end of a disjointed first quarter. Harlequins were becoming the dominant force and almost scored the first try of the game. A neat pass from George Lowe sent David Ward through a gap allowing the hooker to run 30 metres before being hauled down. Quins maintained the movement and appeared to have scored when Matthews crossed the line but the TMO ruled that the lock had been held up. Against the run of play,

Wasps took the lead with a solo try from Simpson. On the visitors 22, Simpson surprisingly robbed Luke Wallace of the ball to race away for the try which Goode converted.

Quins quickly responded with an excellent try when skilful handling resulted in Mike Brown sending in Matthews for the try which Evans converted to give the visitors a deserved 13-10 interval lead.

Wasps fumbled the restart and soon conceded another penalty which Evans kicked to extend the advantage but Goode responded with two of his own, one an excellent effort from inside his own half. These penalties were the only scores of an error-ridden third quarter, which ended with the scores level at 16-16. Quins produced another flowing movement and looked set to score but Danny Care knocked on five metres out from the home line but from the scrum

Wasps, who had just lost their hooker, Carlo Festuccia through injury, were pushed off the ball. From the reset,