Brendan Macken could feature against Connacht 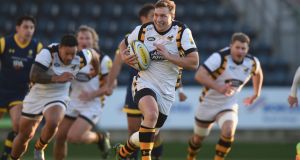 Brendan Macken could be in line for a place in the Wasps team for Sunday’s Champions Cup match against Connacht at the Ricoh Arena.

The 25-year-old former Leinster centre and underage international was a try scorer in the English club’s Aviva Premiership victory over the Worcester Warriors at the weekend and giving ongoing injury issues could retain his place in the midfield.

Outhalf Danny Cipriani also missed the Worcester match while England international Elliot Daly misses Sunday’s game against Connacht and the return game the following weekend at the Sportsground as he is serving a three week suspension following his sending off in a test match against Argentina.

Wing Christian Wade is also doubtful but Wasps look like being able to hand a debut to former Wallaby international Kurtley Beale, who has been sidelined since May with a knee injury. Young said: “Kurtley is back in training and if things go to plan he’ll be available for selection either next week or the week after. He’ll certainly appear or play some part in one or both of the European Cup games with Connacht.”

Macken, who played 46 times for Leinster, signed a two year extension to his contract with the English club earlier this season that will keep him at the Ricoh until the summer of 2018. He has played five matches for Wasps this season, starting in four games.

Marty Moore, who joined Wasps from Leinster during the summer, has started the club’s last two matches - he has made 10 appearances this season - in the absence of the injured Jake Cooper-Woolley, although the latter is expected to be available this weekend: prior to that the pair shared game time.

Young will be able to bolster the team with a couple of England internationals in Nathan Hughes and Joe Launchbury, the latter having served a two-week suspension but another, James Haskell, is out until the New Year with a toe injury.