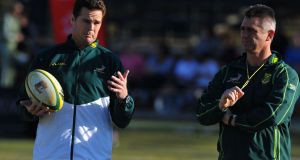 Anthony Foley has been usurped by the appointment of Johan ‘Rassie’ Erasmus as their new director of rugby from next season, while Ian Costello and Mick O’Driscoll are moving on and the positions of Brian Walsh and Jerry Flannery are up in the air.

Too many chefs spoil the broth? Or in this case, who will the chefs be? Foley will fulfil the one-year contract extension which he has agreed for next season, but Munster’s future make-up, much like their status on the pitch, remains unclear.

In the longer-term, from next season onwards, Erasmus will surely bring in one or two new assistants, and the accents as well as the tenor of the coaching will change distinctly.

“If I came along to you in the morning and said ‘for romantic reasons we were appointing someone’, I’d say there’d be a different opinion on it. This is a ruthless business and a very difficult business, a cut-throat business. You’ve just got to do what’s best when you see what’s available at any particular time.”

There had been Irish interest in the role. “If you’re asking me were there Irish candidates considered, the answer is yes.”

As to whether there’d been more than one, he said: “I’d leave it at that.”

All this upheaval comes at a time when Munster face uncharted territory against Edinburgh in Musgrave Park on Friday in the first of two win-or-bust home games if they are to dine at European rugby’s top table for the 22nd year in succession next season.

Confirming he will remain on for another season, Foley said: “I have a contract here, yeah. It’s no big deal.

“My whole focus is Edinburgh. This is all happening literally in the background – maybe in the forefront for other people – but for us the most important thing for Munster is Edinburgh in Cork on Friday night.

“To be honest, it was said to the players this morning. It was done and dusted in 30 seconds and we move on. No questions. We have a massive game on Friday night.”

Foley’s nose seemed decidedly out of joint, but he maintained otherwise. “No, I’m fine. I’m put out by the fact that we have a ‘s**t or get off the pot’ game against Edinburgh and I’m talking about something that is going to happen in July.

“In fairness to Garrett and all the people involved in it, they haven’t imposed anything on us in terms of we have to do this, that or the other thing. We have been allowed get on with our jobs.

“Since the Connacht game we have been chewing over the fat around Edinburgh, making sure that we are properly prepared. Alan Solomans has a very good side, very strong physical side. They will come straight at us. We have a lot on our plate this week.

“Trust me, the lad coming in, hopefully he’s brilliant, comes in and we have a great time together. But you only have a great time if you win. It is important for us to make sure we’re position that we can play European Cup rugby next year under the new regime.”

In tangible terms, missing out on the Champions Cup would probably cost a cash-strapped Munster in excess of €500,000 in gate receipts, according to Fitzgerald.

“But it’s quite interesting to see what’s happening with gate income everywhere; when we even look at what happened at the two semi-finals this weekend.

The process for the naming rights to Thomond Park was still ongoing and although the new training centre in University of Limerick had been delayed by up to six weeks, it was still on scheduled to be opened in August.

Fitzgerald confirmed that while some key performance indicators were up – sponsorship, under-age numbers – gate income had been down again this season. Accepting that the buck stopped with him, and that the Professional Games Board had to accept some of the decline on and off the pitch, as to whether failing to qualify for the Champions Cup could impact on his own position, Fitzgerald said: “I’m sure people will have different opinions on it. They haven’t been afraid to express their opinions previously. I see it as a challenge.

“I’ve been here since 1999 and I think it would be the first year in how many years that we didn’t qualify. I would see it as our immediate aim to get back up there the following year. And I think we would be capable of doing that.”

When asked whether he would be Munster chief executive next season, Fitzgerald smiled and said: “Hopefully, unless you have some other idea about it.”

1 Ken Early: Liverpool fans, Bamber Gascoigne and a close shave in Istanbul
2 The Offload: Philip Browne’s grave outlook should be taken seriously
3 As news gets better, can the pull of The Field be resisted?
4 Could Disney World be the NBA’s knight in shining armour?
5 Tiger shines and Brady bites back as charity match proves an enjoyable release
Real news has value SUBSCRIBE