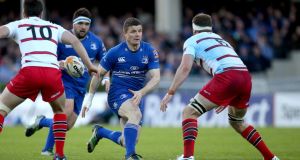 Brian O’Driscoll: Matt O’Connor maintained he’ll be okay for next Saturday’s semi-final game against Ulster at the RDS.

The end-of-season play-offs have a decidedly familiar ring to them, with Leinster earning their fifth home semi-final, Glasgow and Munster each in the knockout stages for the fourth time and Ulster for the third. Yet there’s a slightly different feel to them after the weekend’s events, with Leinster and Ulster suffering further physical hardship in victory, although the latter also inflicted more psychological damage on Munster as each face into away semi-finals.

Leinster also topped the regular season table for the third time in five seasons to earn the carrot of a home final with an undistinguished 15-13 win over Edinburgh at the RDS but in the process Richardt Strauss suffered a torn hamstring.

Matt O’Connor not only ruled their hooker out of the play-offs but cast doubt on Strauss being available for the Argentine tour by describing it as a “significant strain.” Although Brian O’Driscoll’s shoulder injury looked bad, O’Connor maintained he should be okay for next Saturday’s semi-final at home to Ulster, while Rob Kearney’s departure was precautionary, the returning Fergus McFadden and Seán O’Brien had no adverse reaction and Zane Kirchener should return next weekend.

Mike McCarthy’s strained calf will mean Leo Cullen starting next week, while Luke Fitzgerald was less and less likely to play any rugby again this season due to his groin/hip flexor problem.

On Friday Munster go to Scotstoun to face an in-form Glasgow side who registered their eighth League win in a row at home to Zebre on Saturday evening, in what was also their third bonus-point win on the spin.

Damaged goods
Rob Penney’s team do so looking distinctly like damaged goods after a largely self-inflicted 19-17 defeat at Thomond Park to a makeshift Ulster, whose injury list has been compounded by the probable loss of Nick Williams.

However, Penney maintained he was more disappointed than concerned that Munster have lost momentum entering the play-offs after a performance in which he estimated six players played to their potential, with six days to address the problems.

“I don’t tend to shout and roar anyway. They know. Jeez they don’t need me to tell them about an effort that wasn’t up to scratch so we’ll do some reviewing during the week. I say it all the time, when the big games come we’re going to have to be at our best. We’re a side that has to play at its best to get the outcome.”

To that end Penney’s primary objective will be “just our emotional attachment to the game probably. I mean there’s nothing technically or tactically with the boys or even physically really that we can do in five/six days to get the turnaround. All that work has been and should have been done well before now so that will the key thing, making sure of an emotional attachment with clarity and that will give us our best opportunity to get close to Glasgow who are on fire at the moment.”

Ulster retained only three of the side that lost at home to Leinster and one of them, Nick Williams, was stretchered off with damaged knee medial ligaments before half-time. “Nick’s not looking too good, I’d say he’s gone for next week,” admitted Mark Asncombe.

‘Worked hard’
On the prospect of Ruan Pienaar, John Afoa and others returning, he said: “They all trained and worked hard yesterday, did the work that was asked of them. But they’re only doing certain things, we’ll assess that Monday, do a session on Monday afternoon and see where they are. We’re hopeful one or two of them will be back.”

In any event this win will have constituted a huge boost for the entire organisation and Anscombe was understandably as proud as punch. “What we talked about with them this week was ‘relish opportunities when they come. You don’t know when they’re going to come, but when they do you’ve got to take them. If you do that then you put your hand up for more opportunities’. The pleasing thing is they did that today.” In reference to Ulster’s outstanding scrum, Anscombe said of Callum Black: “I would go as far as saying he is the second best scrimmaging loosehead prop in Ireland.”

Ulster took Leinster to a score with 14 men, although Anscombe maintained it didn’t necessarily follow “that by keeping 15 on the field we’ll go and beat them. It would be silly and foolish to think that. They’re a quality team, look at the internationals they have there, and on the bench. That’s quality. We underestimate them one bit and we will not get the result we want”.

The 23-year-old has made 19 Super Rugby appearances for the Crusaders and represented Canterbury in the ITM Cup on 39 occasions. A former New Zealand U20s player the Christchurch-born Bleyendaal captained the side to victory in the 2010 Junior World Championship in Argentina.