Ireland lock recovers from knee surgery to start against Zebre 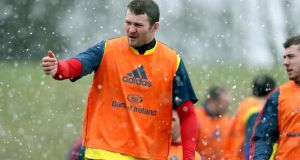 Ireland lock Donnacha Ryan will make his first appearance since the middle of December in Munster’s RaboDirect Pro12 clash at home to Zebre at Musgrave Park on Saturday (6.45pm).

The 30-year-old underwent key hole surgery on a knee injury four weeks ago but returns to the side for the first time since their brilliant Heineken Cup away victory over Perpignan.

Ryan forms part of a new secondrow alongside Billy Holland, who will captain the side. It means Donncha O’Callaghan will have to come off the bench if he is to win his 241st cap and become the most capped Munster player in front of his hometown crowd.

Munster coach Rob Penney has made widespread changes from the 54-13 win over the Cardiff Blues at Thomond Park last weekend, with Ireland backrow Tommy O’Donnell coming in at openside flanker and Dave O’Callaghan at blindside, with CJ Stander shifting to number eight.

There are also two changes to the frontrow with James Cronin coming in for Dave Kilcoyne at loosehead and BJ Botha taking over at tight from Stephen Archer.

JJ Hanrahan holds on to the number 10 shirt after his perfect 10 from 10 kicking display against Cardiff, with Ian Keatley starting at inside centre alongside Johne Murphy.

Murphy moves from the left win, with Simon Zebo moving from fullback and Felix Jones returning to the number 15 jersey.

Connacht coach Pat Lam has made three changes to the side that lost 8-6 away to Glasgow for the clash against Edinburgh at the Sportsground on Saturday.

Following his start in last week’s Eagles game, Dave McSharry makes a welcome return to partner Eoin Griffin in the centre. His appearance allows Craig Ronaldson to shift to outhalf where he forms the halfback pairing with Kieran Marmion.

Galway-born Tiernan O’Halloran has been named to start on the left wing and features in an all-Irish qualified back line.

Up front, Connacht’s highest capped player Michael Swift is brought into the secondrow. His introduction means that Andrew Browne moves back to blindside flanker.