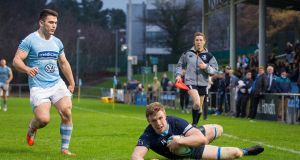 Cork Constitution continued their strong start to 2016 with a 32-0 bonus point win over a disappointing Old Belvedere side at Temple Hill.

Brian Hickey’s men picked up five valuable Ulster Bank League points for the second week running, with centre Ned Hodson dotting down in each half. It was a confidence-boosting result ahead of next Saturday’s Bateman Cup semi-final trip to Division 1A leaders UCD.

It was business as usual at the Belfield Bowl where UCD swept Garryowen aside in a 45-19 bonus point triumph. With Leinster young guns Ross Byrne and Nick McCarthy directing operations from half-back, the students pushed seven points clear at the summit. Wingers Adam Byrne and Barry Daly and flanker Dan Leavy all scored braces, while fullback Billy Dardis finished off the seventh and final try.

Fourteen-point ace Scott Deasy played the captain’s role to a tee as his late penalty guided Lansdowne to a 19-18 victory over play-off rivals Clontarf at Castle Avenue.

Belfast Harlequins opened their win account in Division 1B as they pipped Blackrock College 12-10 at Deramore Park. Ireland Under-20 international Jacob Stockdale scored the match-winning try 10 minutes from the end.

Shannon celebrated David O’Donovan’s 200th All-Ireland League appearance in style as they defeated Munster rivals Dolphin 13-3 at Irish Independent Park. O’Donovan, in his 16th year at senior level, lined out on the left wing for the visitors as he set a new caps milestone. His wing colleague Greg O’Shea ran in the game’s only try, set up by flying full-back Stephen Fitzgerald.

Tries from Ryan O’Loughlin, Ivan Dineen and Steve Toal-Lennon did the damage for Division 1B leaders St Mary’s as they overcame south Dublin rivals Old Wesley 20-14 at Donnybrook, while Ballymena remain two points behind St Mary’s after edging out UL Bohemians 17-15 at Annacotty, their third and final try coming from Ulster-capped backrower Stephen Mulholland.