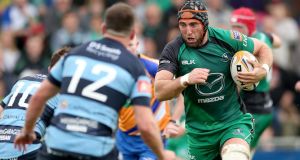 Connacht captain John Muldoon: “Our squad depth is the best it’s ever been”. Photograph: James Crombie/Inpho.

The flip side of Connacht completing marquee signings in Mils Muliaina, Bundee Aki and Tom McCartney, along with enhanced financial backing from the IRFU, is the heightened expectations upon them from within and outside. A province expects, and all that.

“We completely understand,” admits captain John Muldoon on behalf of the senior players. “And it’s like that for the young players as well,” he adds in demanding that other indigenous young players follow the lead set by Robbie Henshaw and Kieran Marmion over the last couple of seasons.

“When you lose Craig (Clarke) and Gavin (Duffy) and Dan Parks all in one year, you lose a lot of experience. Some of the lads have been dragged up into the leadership group and other lads have stepped up because that’s their personality.”

That said, as he enters his 12th season with his native province, Muldoon believes “our squad depth is the best it’s ever been”, adding that this will hopefully reduce the need for some players to start ten or 12 games in a row. “That’s where the problems arise. You’re carrying knocks and you’re just mentally and physically drained, and hopefully we’ll have the squad to counteract that this year.”

Yet even though the trio of Kiwi imports will all, most probably, miss the first six rounds of the Guinness Pro12 and Connacht’s opening two Challenge Cup games, the pressure on Connacht to make tangible improvement in terms of results will commence with their opening game at home to the Dragons on Saturday week.

“But at the same time we haven’t always managed to keep the players that we wanted to keep. I think that’s changed over the last few years but ultimately, we do need results, and results are the proof of the pudding. Bringing in marquee signings, or whatever you want to call them, will demand results as well.”

Hence, as important a statement as the high-profile arrivals was keeping the aforementioned Henshaw and Marmion, though retaining them in the longer term also accentuates the demand for improved results.

“There are two sides to it,” said Muldoon. “Robbie is a young man and he’s a very ambitious young man. His personality doesn’t reflect his age, and the maturity he has, both on and off the pitch, compared to some of the lads his own age is phenomenal. So for him to try and better himself, and if he thinks that it’s outside Connacht, I’ve no doubt that he will leave if that’s the case.

Muldoon, now 31, had one offer to join a rival Irish province earlier in his career. “Maybe I wasn’t smart enough to leave,” he quipped at Wednesday’s Pro12 launch. “Everybody’s different. Obviously there’s part of me that would have liked to have gone to a different set-up, and been involved in something different. But there’s another part of me that says this is where you’re from and is proud I stayed loyal to Connacht. Maybe if I was 22 again, I might go for something, but it wouldn’t be to stay in Ireland to be honest. As I get older part of me would have liked to have lived abroad maybe for a year or two.”

“When you’re trying to drive standards and you’re being the captain, and you’re pulling people up on stuff they’re not doing well when you’re not doing it yourself, then it’s time to look in the mirror,” said Muldoon.

“I think the pressure came more from myself than anywhere else. I felt I had to talk whereas now I’m a little bit older and wiser. Back then part of me thought I had to have the final say. Now, if some of the other lads have spoken, and spoken well, I’ll leave it and walk away.”

“I think I’ve learned a lot from Gav and especially Craig. You’re not a captain of two Super 15 champions for nothing. He was exceptionally good at hitting the right point at the right time, and then going away and not languishing too long or talking for the sake of talking.”

“I think I’ve calmed down a little bit as well and my temper doesn’t get the better of me as it used to. Hopefully that will all help when it comes to captaining the side this year. I’m not putting as much pressure on myself which is ultimately probably going to help me, and I can focus more on myself as opposed to other people around me.”

There’s enough pressure on Muldoon without adding to it unnecessarily.

1 Athletics Ireland agree to stage national championships
2 Ken Early: PSG would be sensible final move for Ronaldo
3 Manchester United huff and puff their way into semi-finals
4 Rory McIlroy: Maybe I’m just not as good as I used to be
5 There’s a bad moon rising but East Belfast GAC shine on
Real news has value SUBSCRIBE