Connacht bow out with a whimper 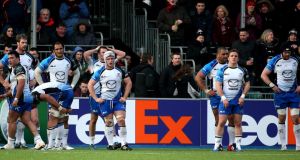 Saracens 64 Connacht 6: Connacht suffered their worst ever Heineken Cup defeat as Saracens crushed Pat Lam’s side to make sure of their place in the Heineken Cup quarter-finals. While Toulouse finished top of Pool Three - by virtue of a 16-6 win in Zebre - Saracens qualify as one of the best two runners-up but face a difficult away tie in the next round.

Hodgson’s misses and two penalties from Dan Parks allowed Connacht to remain in contention for much of the first half - but it was all one-way traffic after Connacht prop Nathan White had picked up a yellow card.

Brits and the Vunipola brothers, Mako and Billy, were at the heart of a dominant home pack which enabled star performer Goode and Brad Barritt to impress in the back line.

Hodgson was selected at outhalf for the hosts with Owen Farrell on the bench. Duncan Taylor was included in the centre in place of Wyles and there were recalls to the starting line-up for forwards Matt Stevens, Kruis and Ernst Joubert. Connacht opted for experience with Parks, Gavin Duffy and Michael Swift back in the side - and Parks made no mistake with an early penalty.

Hodgson was wide with a long-range penalty attempt but soon after the home side led with a well-crafted try. From a scrum 35 metres out, Barritt and Mako Vunipola made penetrative runs which put the visitors’ defence on the back foot. The ball was recycled and a neat pass from Hodgson gave Ashton just enough room for the wing to squeeze in at the corner.

Hodgson missed the conversion and declined to attempt a kickable penalty as Saracens chose a more attacking option - but they were not rewarded as Billy Vunipola was unable to force his way over from a line-out five metres out.

Despite having the better of the opening quarter, Saracens trailed 6-5 at the end of it after Parks kicked his second penalty. Hodgson was successful with his third kick at goal before Saracens scored another excellent try - Goode and Hodgson making enterprising runs to provide Strettle with an easy touchdown.

Connacht suffered a further blow when White was sin-binned for stamping on Barritt in a ruck, with the TMO deciding that a yellow card was a sufficient punishment.

This proved costly as with the last play of the half, Brits finished off a line-out drive to give Saracens an 18-6 interval lead.

Within two minutes of the restart, the bonus point was in the bag. From inside his own 22, Goode ran brilliantly to evade five defenders before feeding Taylor, whose pass sent Strettle in his for his second try.

White returned but it made no difference as the irrepressible Goode again tore apart the visitors’ defence to score a superb solo try.

With the game won, Saracens made a raft of changes with five substitutions in quick succession but it did not stop their flow with Kruis forcing his way over for the try which Hodgson converted to loud cheers.

Hodgson was replaced by Farrell but this was soon reversed as Farrell left the field with a cut head.

However Saracens continued on the rampage with replacements, Wyles, Wray and De Kock all scoring tries before Strettle and Ashton crossed to ensure Connacht were routed.