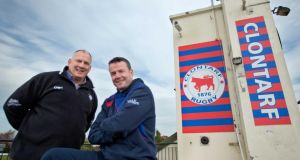 Barbarians coach Mike Ruddock and Clontarf coach Andy Wood. “We will take it any way we get it. Thank goodness for Garryowen. We just knew that we had to win and hope that Garryowen would do us a favour,” said a delighted Wood following his team’s league title win. Photo: Morgan Treacy/Inpho


After all of their near misses and bad luck, Clontarf finally got the break they needed to capture the Ulster Bank (All-Ireland) League for the first time at Castle Avenue on Saturday.

They finished a point clear at the top of the Division 1A table after they beat Ballynahinch 27-13 and the leaders Old Belvedere surprisingly lost 23-18 to the bottom side Garryowen at Dooradoyle.

It was an extraordinary conclusion to a competition which has had more than its share of twists and turns over the final few weeks. Everything suggested that Clontarf had blown it following successive defeats to UCD and Lansdowne.

Old Belvedere only had to beat the already-relegated Garryowen in their final game to secure the title for the second time in four years.

In keeping with that expectation, the trophy and the winners medals were all brought down to Dooradoyle. Just in case, there was a replica trophy at Castle Avenue.

But the pressure proved too much for Old Belvedere. They got away to a bad start, conceding a try in the opening few minutes and never really recovered.

Clontarf, meanwhile, were having a battle of their own against second from bottom Ballynahinch. At one stage in the second half the sides were level at 13-13 but Clontarf eventually pulled clear with substitute scrum-half Peter Du Toit getting two tries.

Coach Andy Wood summed the day up: “We will take it any way we get it. Thank goodness for Garryowen. We just knew that we had to win and hope that Garryowen would do us a favour. It wasn’t the ideal situation but we also knew from our own experiences in recent weeks that anything could still happen.

“It’s fantastic for this club that we have finally got our reward. We played well all season, beating Old Belvedere in a fantastic contest recently, but then we suddenly went flat for our games against UCD and Lansdowne.

“Thankfully, the intensity was back today. Ballynahinch really put it up to us but we came good in the second half.”

Fully deserving
“We put ourselves in a position to win the league but we made too many mistakes, missed too many tackles and conceded too many turnovers.” he lamented.

“You can’t expect to win in those circumstances. From the start, we dropped the first ball and they scored from the scrum. That gave Garryowen huge belief, they played well and and were fully deserving of their victory.

“To be fair, our guys showed tremendous character but it just wasn’t enough. It’s been a fantastic competition, congratulations to Clontarf, they have been very good all season.”

There’s absolutely no doubt that Clontarf are worthy league winners.

They will now go into a promotion/relegation match against the second placed team in Division 1B Buccaneers.

What, one wonders, would Garryowen give to be in that situation?

To beat Old Belvedere was an outstanding achievement, particularly as they were down to 13 players with two men in the sin-bin at one stage in the final quarter.

Unfortunately, Garryowen left themselves with far too much to do in the league after a disastrous opening half to the season.

The arrival of Eddie O’Sullivan in an advisory role brought about a distinct improvement but it has come too late to avoid relegation. O’Sullivan described Saturday’s victory as “bitter sweet”, as did coach Tom Tierney.

Tierney now plans to move to another position while former Irish coach O’Sullivan is uncertain at this stage what his commitments are for next season.

UCD finished third in the Division 1A table following a 45-24 home victory over Young Munster. They scored six tries with two of them coming from Jamie Glynn.

However, the good news for Dolphin is that they have stayed ahead of Ballynahinch and will remain in the top flight. Elsewhere, Cork Constitution and St Mary’s College shared eight tries in an entertaining 30-30 draw at Temple Hill.

Pride of place in Division IB goes to champions Terenure College for their remarkable achievement in winning all of their 18 games. They had to come from behind to win the last of them 36-29 against second placed Buccaneers at Lakelands Park.

The other main story in Division 1B was the confirmation that Blackrock College have been relegated alongside Dungannon. This, despite Blackrock recording a useful 28-26 bonus point away success over UL Bohemians.

The problem for them was that Malone also won, hammering Corinthians 52-18 at Gibson Park.

In the remaining games, Dublin University beat Shannon 19-17 and Belfast Harlequins trounced bottom outfit Dungannon 47-19 at Deramore Park. Thomond and Kenturk both won promotion/relegation play-offs. Thomond will figure in Division 2A next season after defeating Highfield 14-10 while Kenturk got the better of Instonians 17-13 to secure a position in Division 2B next season.

1 Nicholas Quinn: ‘Swimming became how I dealt with grief’
2 A beautiful, happy accident - Moneyball is the best sports movie ever
3 Iggy Clarke cherishes the friendships he made while playing for Galway
4 Matt Williams: We all need a bit of Bud Maher’s resilience right now
5 Ian O’Riordan: The aloneness of the long-distance rider
Real news has value SUBSCRIBE