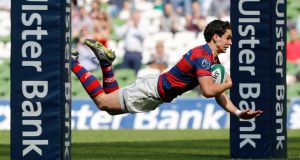 There is a beguiling quality to Joey Carbery’s prowess that ensnares opponents and enraptures team-mates and spectators. Only the churlish would remain impervious to his appeal as a rugby player.

There could have been few of those after he prompted Clontarf to a second Ulster Bank League Division 1A title in three years against a gallant Cork Constitution team that almost snaffled a victory that would have seemed impossible for much of yesterday’s final.

The heartbreaking nature of the last season’s one point defeat to Lansdowne was expunged in victory but Clontarf had to withstand a stirring second half Con comeback that came up a fraction short. Clontarf were the better team but that in no way diminishes the efforts of their Cork opponents and All Ireland Cup winners, who trailed by 18-points at the interval, 21-3 but came back to within three, with a quarter of the match still remaining. It made for riveting viewing.

The 20-year-old Carbery was deservedly man -of-the-match for his contribution. A dip of the hip and glinting acceleration, his range of passing, nuanced and accurate and his vision and execution, whether at outhalf or from the fullback position from where he defended when Con had the ball, is an irresistible cocktail.

He did miss three kicks at goal, two of which were in the difficult category, but he might well have played his last game in a Clontarf jersey as the Leinster academy player looks to get more than the four minutes he managed for the province’s senior team this season.

Clontarf coach Andy Wood has enjoyed a box seat all season. “It’s pretty obvious for everyone one to see. Whether he (Carbery) was taking a high ball under huge pressure, running our attack shape or making breaks, it was a pretty spectacular performance.

“Defensively, whether he stands at 10 or 15 he can make some pretty effective and dominant tackles. He’s a very, very special player. We’ve been lucky to have him this year.

Wood understands that Leinster are likely to want first dibs on his outhalf from next season. “I’d suspect so. It was pretty clear how good he was today and how good he’s been all season, turning it on when it counts. . . It got us over the line ultimately.”

Carbery, who arrived in Ireland from Auckland as a 12-year-old, settled in Athy where his mum is from, playing club and schools rugby locally before moving to Blackrock College for sixth year. From there he progressed to the Irish Under-20s and the provincial academy. Ireland coach Joe Schmidt was among the attendance at Lansdowne Road and will have noted the gifted playmaker’s performance but Clontarf’s win was not just about Carbery. Matt D’Arcy, Conor O’Brien, Michael Noone, Bryan Byrne and Karl Moran were conspicuously excellent, so too the strong running Mick McGrath.

Con pillaged their opponents lineout, won some scrum penalties too, yet found themselves trailing 21-3 at the interval, the pick of the three tries, D’Arcy’s gliding break and Carbery’s support line and acceleration onto Michael Brown’s pass for the second. Con’s reply came through the boot of their outhalf Tomás Quinlan, a contemporary of his direct opponent in the Ireland U-20 squad. It was a poor return from a side that began well but only their standout fullback Darren Sweetnam showed the footwork to cause Clontarf serious problems.

The second half was very different and but for Clontarf wing Mick McGrath’s try was completely dominated on the scoreboard by Con. They racked up three tries from the impressive Max Abbott, Rob Jermyn and Sweetnam, the latter following a clever kick by the lively Ryan Foley, with Quinlan adding seven points with the boot.

There were still 20 minutes to play but a game that was scoreless for the first half hour didn’t see another during that closing quarter.

There was much to admire in Con’s resilience as they clawed a way back. Ultimately though Clontarf, who butchered some other try scoring chances, were deserving winners, both on the day and over the season.