Division 1A will revert to playoffs, semi-final and final to determine the champions 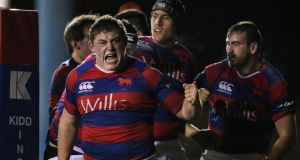 Clontarf’s Tadhg Furlong in action for the club against UCD. Photograph: Cathal Noonan/Inpho

The IRFU today announced the return of semi-finals and final - Division 1A - to the Ulster Bank League club rugby landscape and also an extension in terms of volume to the ‘Friday Night Lights’ fixtures.

Champions Clontarf will take on Young Munster at Castle Avenue when taking the first step in their title defence.

The elite division format has once again reverted to end of season playoffs. The Division 1A semi-finals take place on Saturday, April 25th with the final a fortnight later on May 9th. There will be an increase in the number of games streamed live on the IRFU website.

In Division 1B the opening round of fixtures sees the clash of two Limerick heavyweights as Garryowen, relegated from the top tier last term, welcome Shannon to Dooradoyle.

The two clubs promoted from Division 2A, Galwegians and Ballymena, host Dublin University and Corinthians respectively while Buccaneers last term will travel to Malone.

Newly promoted Nenagh Ormond must travel to Stevenson Park where Dungannon await on the opening day while Blackrock, relegated from 1B head for Parsonstown and a clash with NUIM Barnhall.