Buckle up Joe, coaching a national team is a bumpy ride

Coaching is about perception not substance 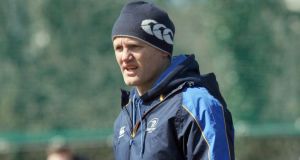 What do Warren Gatland, Graham Henry, Wayne Smith, Steve Hansen and Bob Dwyer have in common?

They were all national coaches whose contracts were terminated. Then they returned to coach and win at international level once again.

Warren Gatland was dismissed by Ireland. Graham Henry and Steve Hansen by Wales. Wayne Smith by New Zealand and Bob Dwyer by Australian in 1983, before returning to coach the Wallabies and win the 1991World Cup.

The legendary Miami Dolphins coach, Don Shula said, “Success is not forever and failure is not fatal.”

Coaches need to embrace perceived failure as a natural element of the competitive process. I detest the media term of coaches being “sacked”. It implies improper or incompetent behaviour from the coach. Rarely is this the case.

At the highest levels what usually causes a coach’s contract to be terminated, is the breakdown of relationships between the coach, his players, the chief executive and the chairman of the board of directors.

For career coaches contract termination is as inevitable as sunrise. It is not a matter of if it will happen but when.

This very public humiliation of perceived failure has only two outcomes. It either breaks the individual and he never coaches again. Or the coach endures the insults, innuendos and personal attacks as a cathartic experience, from which the individual emerges wiser, emotionally stronger and more determined than ever to prove the bastards wrong.

I speak with personal experience on this topic. To the public, coaching is about perception and little about substance.

Coaching is a process. The coach should be evaluated on his systems, but that is almost never the case.

A rugby team is made up of three groups. The players, the chief executive, chairman and board and the coaching staff. All three must have the same mission and the same time line in which the mission will be achieved.

In a team environment losing matches magnifies the unimportant issues into irrelevant crises.

Defeats place great pressure on the personalities of the players, the board of directors and the coaches.

It is the coach who must manage these relationships and keep everyone focused on the collective goal or the group will fracture into factions. It is simple group dynamics that are triggered by both personalities and circumstances.

At international level, the media is a major factor. Negative media affects individuals with weak characters and large egos.

When the team is losing, as we say in Australia, “you get to know who your true mates are.”

As a young coach at both the Waratahs and Leinster, I was very fortunate to have great chief executives and chairmen. I can tell you that this is very rare in professional sport. They supported and empowered me by giving me the time to develop a quality team.

In the legal professional, judges are appointed only after they have acquired the necessary experience to apply the law. While knowledge is required to learn the law, wisdom is necessary to apply it to individual cases.

Experience in the law can only be gained by winning and losing cases. Coaching is no different.

Great heights
Joe Schmidt is a wonderful coach who has taken Leinster to great heights. Not only has he coached Leinster to win but he has reignited the running game in the soul of Leinster.

I believe the philosophy of Joe’s running game should be at the heart of an Irish national team philosophy. It is a creative, positive expression of the Irish character. For too long Irish teams have copied other nations. A national philosophy is long overdue and will lead to long term success.

The weakness in Joe’s CV is he has not had a variety of head coaching experience in which he has to “meet with triumph and disaster, and treat those two impostors just the same”. He has only head coached Leinster and he has only met with triumph.

Leinster is a dominant winning club. That is an easy situation to manage. The Irish national team is neither of these.

The new national coach will have to manage on field issues and the nation’s expectation to consistently win, at a time when its greatest players are retiring. That is a difficult situation.

If Joe is to be the next national coach and I hope he is, he will require the support and wisdom of a director of rugby who is yet to be appointed. Joe will have to report to him.

The director of rugby should be in place before the national coach is appointed. This is not a good situation to support Joe.

If I could offer Joe one piece of advice, it is that the international coaching environment is very different from the supportive environment of Leinster.

So Joe, buckle up your seat belt. Like all of us who have coached at international level, you are in for a hell of a ride.

1 Georgia and Fiji in line to join Six Nations sides in eight-team tournament
2 Ken Early: Another Mourinho masterclass in going through the motions
3 Serge Aurier’s brother reportedly shot dead in France
4 All in the Game: Jack fact-cheques money story
5 Malachy Clerkin: Sleep well Jack, you made us all happy
Real news has value SUBSCRIBE

Serge Aurier’s brother reportedly shot dead in France 19:01
Stephen Scullion: ‘Athletes will do long-term serious damage chasing those results’ 18:00
Georgia and Fiji in line to join Six Nations sides in eight-team tournament 15:28
Shamrock Rovers receive bye in first round of FAI Cup defence 13:16
Manu Tuilagi to stay in England after signing for Sale 12:48
Crossword Get access to over 6,000 interactive crosswords