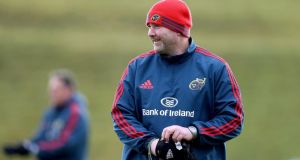 Anthony Foley has been named as the new coach of Munster. Photograph: Dan Sheridan/Inpho

Anthony Foley says his promotion to the head coaching job at Munster from next season will not consume him – as it’s what his life in rugby has been building towards.

The 40-year-old former Munster backrow star was unveiled as Rob Penney’s successor on a two-deal deal, with an option on a third, at a press conference at Thomond Park.

Munster chief executive Garrett Fitzgerald admitted that the Munster Professional Game Committee did not have to look outside the present coaching structure to find their man, although Fitzgerald did confirm that applications had been received from outside the province.

For Foley it continues a link with Munster that goes back to his debut in October 1994 and with Thomond Park from his childhood playing underage with Shannon RFC.

Asked if the job would consume him, Foley said: “I think as a Munsterman it does anyway. It’s all part of being brought up in rugby. When I was growing up my playground was Thomond Park. That’s where I was every weekend and every Tuesday and Thursday I was in and around there training. For me that’s what I know.

“Being asked to be head coach here is special. It was always special when I was captain here, it was always special when I got my first cap here and playing underage here. It’s a special time for any kid and to this point, I feel lucky. I’m going to grasp it with both hands and really go after it and try and make this as strong a club as possible.”

Foley accepted that he will have little time to think about the head coaching role until he begins his tenure on July 1st and is fully concentrating his efforts on Munster’s two-pronged bid for silverware this season.

“It’s a bit surreal at the moment. It’s like it’s happening to somebody else to be honest,” explained Foley. “Everything is a process around here and y’know it hasn’t really settled in yet and it won’t until July, which is when the job starts.

“That will happen over a period of time that won’t happen today or tomorrow. It’s just important that we get the right people in and we get off on the right foot in July but for me we’re in two competitions.

Pressed on the potential backroom team he has in mind, Foley said it was far too early for him to think about his coaching ticket.

“I wouldn’t think it’s appropriate to talk about it here and now. You talk about it to those people and maybe some are in other jobs, you don’t know. I think you keep everything to yourself and to the committee that’s involved in that and make sure it goes through the right process and get the right people,” said Foley, who will also start his search for assistants from within.

“I think you look within. We’ll look outside as well and see what’s best. You make sure that the players are challenged within this group, look at the players we have – top internationals, former captains, current captains – so a lot of them need driving as well so they are driven by the best coaches.”

Fitzgerald believes that the announcement of Foley as coach will have no effect on his relationship with Penney ahead of a hectic end of season schedule.

“No, I don’t think so really. All of the people involved are mature rugby people and all of them will have only one thing at heart and that is the performance of the team,” said Fitzgerald.

“I think Rob has been very positive about all of this. I spoke to him about it this morning and yesterday. I think himself and Anthony have only one thing in mind and that is trying to get the maximum out of this season for the group of players they have and hopefully some silverware.

“I think from Anthony’s point of view, the better they finish this season the better it will be commencing next season, so I don’t see it as an issue and they have worked together for two years.

Fitzgerald outlined that Foley was the only candidate interviewed for the post of head coach after the Professional Game Committee decided to start with an internal search.

“We did interview him and we did sit down with him and he did outline his philosophy on the game and his plans and his thoughts and different things on it about the way he would like his period to develop and what he would like to achieve. We did that in conjunction with the IRFU and it was a very satisfactory exercise and we were very happy with the outcome of it.”

1 Gordon D'Arcy: Ireland must go after victory by frightening France into mistakes
2 Robbie Henshaw likely to be the only Irish change for France finale
3 Dave Heffernan delighted to have banished bad memory of his first cap
4 Seán Moran: Will a silent, empty Hill help to loosen Dublin’s grip on Sam?
5 Cork City expected to approve €1 takeover by Preston owner
Real news has value SUBSCRIBE