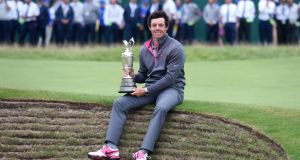 Having spent over 40 years logging the failures of dead certs and sure things, Vinny Fitzpatrick felt he’d become immune to sport’s capacity to spring a shock.

But Sunday evening was an exception.

As Lewis Hamilton was announced as the winner of the BBC’s Sport Personality of the Year for 2014, there was an explosion of disbelief in Foley’s public house on the Clontarf Road.

And no one was more astonished than the beefy bus driver sitting in the snug by the telly, creamy pint to hand, for it was his break-out day.

“Murgatroyd,” he muttered as Hamilton assumed pole position in the public poll. As a miscarriage of sporting justice, it was right down there with anything Vinny could recall.

It was as outrageous as Roy Jones’s loss in the 1988 Olympics in Seoul, where he battered a local Korean to submission, or Harald Schumacher’s assault on Patrick Battiston in the 1982 World Cup semi-final, which went unpunished.

In Foley’s, a golf-daft watering hole, there were jeers of disbelief as Hamilton stepped up to receive the coveted trophy while McIlroy, in the shadows, did the decent thing and applauded.

In their nook, Vinny and his pals were apoplectic with rage and it didn’t take long before Brennie, the most excitable of the crew, teed off his conspiracy theory.

“It’s an anti-Northern Ireland bias, I’m telling you,” he cried. “The average BBC viewer doesn’t give two hoots about the part of the island they requisitioned after The Treaty, and it shows in the vote,” he thundered.

The thread was picked up by Charlie Vernon, whose extensive family tree included a wealthy cousin landowner in Portavogie, the most eastern settlement in Ireland.

“Jackie Kyle, Mike Gibson, Willie John McBride, Billy Bingham, George Best, Alex Higgins, Dennis Taylor and Joey Dunlop, were all world class talents who carried the torch for the North, yet never got a look-in for Personality of the Year.

“Lads, you know my views on the merits of the Union, but I’m just so incensed about this,” he cried.

Macker, who viewed Northern Ireland as a curious land, let out a phlegmy cough.

As heads turned towards the laconic taxi driver, Macker continued rolling a fag, or maybe something stronger, before continuing.

“I think McIlroy sealed his own fate when he announced at the Irish Open he would stand under the Irish tricolour in the 2016 Olympics, rather than the Union Jack.

“In my view, he’d have lapped Hamilton and won in a canter had he nailed his Olympic colours to a different mast.”

Fran was next up on the plinth. “No, it was the dog that did for McIlroy” he said.

As heads turned, he continued. “Hamilton pulled a fast one by having his bulldog with him in the studio, and a British bulldog at that. What was its name? Roscoe. They love their dogs in Blighty and I reckon the pooch swung the votes.”

Two-Mile Boris shook his head and raised his hands. He he said: “My friends, you are all missing the point. McIlroy lost because of the abrupt way he broke off his engagement with Wozniacki. It was not the act of a gentleman, and it flew in the face of the sense of fair play which British people like to uphold.”

As “hear, hear,” echoed around the table, Vinny stayed silent. He was trying to make sense of it all. McIlroy was the outstanding candidate, with impeccable credentials, so how had he not won?

It was time to debunk a few of the hypotheses. “Lads, I think you’ve the wrong end of the four-iron. It’s not about our friends from the North. Mary Peters won the award; as did our own Barry McGuigan, and AP McCoy too.

“How many Welsh winners were there? No, it’s not an anti-North vibe, there is more to it than that.

“As for the flags, I don’t buy that theory either. Lennox Lewis once carried the Canadian flag at the Olympics and he later won Sports Personality of the Year.”

Part of the reason, he was sure, was the absence of live BBC coverage at the US PGA in Valhalla, which McIlroy won so thrillingly, and the Ryder Cup, where he led Europe from the front with two wins and two halves.

In contrast, the Grand Prix races were given the full metal jacket treatment by the Beeb, who had exclusive rights to all the vroom-vroom.

There was also the Briton’s fascination with engines and speed. John Surtees, Stirling Moss, Jackie Stewart, Nigel Mansell (twice) and Damon Hill (twice), had all won Personality of the Year.

Golfers’ feats, it seemed, weren’t held in the same esteem across the Irish Sea. How else to explain just two Sports Personality of the Year golf winners in Dai Rees, who never won a Major, and Nick Faldo?

It was a travesty that Tony Jacklin had never won, while the claims of Sandy Lyle, Ian Woosnam, even Monty, were strong.

“So come on then, Vinny. How did the wrong guy end up in the winner’s enclosure?” asked exasperated Brennie.

“It’s quite simple, really,” said Vinny, placing his pint down gently. As five sets of eyes turned to the burly busman for a pearl of festive wisdom, Vinny cleared his throat and said, ‘They just made a bo**ocks of it’.