Dessie Hughes happy with Our Conor’s post-race gallop, saying: “He travelled well and had loads left” 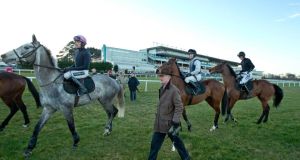 Trainer Willie Mullins in the thick of the action as his horses, including the grey Champagne Fever, go through their pre-Cheltenham Festival workouts after racing at Leopardstown yesterday. Photograph: Morgan Treacy/Inpho


Even a crashing fall by the RSA favourite Ballycasey during a schooling session after racing at Leopardstown last evening couldn’t ruffle Willie Mullins’s apparent sangfroid as the champion trainer took the heat out of pre-festival speculation about Annie Power by confirming the World Hurdle as the unbeaten mare’s Cheltenham target.

Mullins had been expected to leave a decision about Annie Power’s choice of targets as late as possible but in outlining some of Ruby Walsh’s riding arrangements he said: “As things stand Ruby will ride Hurricane Fly in the Champion Hurdle, Quevega in the mares, and Annie Power in the stayers’ hurdle. I’ve had a good chat with my owners and that’s the way it looks.”

The Champion Hurdle had been a realistic alternative for the Rich Ricci-owned Annie Power but she now looks committed to a clash with Big Buck’s in the longer race.

Two of Ricci’s star novice chasers had contrasting fortunes during yesterday evening’s traditional pre-Cheltenham workouts after racing. The Arkle favourite Champagne Fever earned an “absolutely brilliant” report from Ruby Walsh after schooling but the verdict on Ballycasey was definitely more of the ‘must-do-better’ variety.

End the workout
Jumping in a group alongside the possible Gold Cup contender Boston Bob, Ballycasey fell and ran loose until caught in front of the stands. He was remounted by Walsh and they jumped another fence to end the workout.

The Champion Hurdle contender Our Conor worked a mile and a quarter under big-race jockey Danny Mullins, alongside Dessie Hughes’s Gold Cup outsider Lyreen Legend. Our Conor took in the Leopardstown workout last year before a scintillating Triumph Hurdle success and Hughes is aiming to keep to the winning formula.

“He will go over on Thursday ahead of the race on Tuesday. Last year he went over on the Sunday for the race on the Friday and every day he got fresher in himself. He enjoyed it. So we’ll try and keep to the same pattern,” the Curragh trainer said.

“That was nice. He travelled well and had loads left. Lyreen Legend doesn’t usually work that well but he did today. So I’m very happy with them both,” he added.