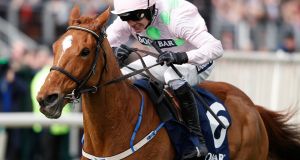 It has come to something when JP McManus gets to fill the role of plucky underdog, but with Willie Mullins set to unleash some of his big guns in Punchestown’s Grade 1 Winter Festival feature this Sunday that could wind up being the legendary owner’s bit-part.

Restricted by unseasonably quick ground conditions up to now, Mullins looks like kicking his winter campaign into top gear in the Stan James Morgiana Hurdle. The last two Champion Hurdle winners – Faugheen and Annie Power – are part of a seven-strong Closutton squad that dominate an entry of 10 left in after the latest forfeit stage.

Mullins is pursuing a sixth Morgiana victory in a row and has indicated he will target the race in strength with last year’s winner Nichols Canyon, Ivan Grozny and another star mare, Vroum Vroum Mag, also among the contenders to line up. “I expect to have a few runners in the race as it is an important race and a nice time of year,” he said. “We will decide on more definite plans after the horses work this week but it is a race we are looking forward to.”

In competition terms, the Punchestown authorities are likely to spend the week keeping their fingers firmly crossed that the two McManus-owned Morgiana entries, Jer’s Girl and Ivanovich Gorbatov, at least line up in order to prevent a total Mullins show.

Joseph O’Brien’s Triumph winner Ivanovich Gorbatov could finish only third on his recent return to action at Naas while Jer’s Girl was not allowed to run at Navan on Sunday due to a skin allergy. However McManus’s racing manager, Frank Berry, hasn’t ruled out both lining up at the weekend.

“Joseph’s horse will run. It’s a bit up in the air about the mare after what happened on Sunday but Gavin [Cromwell] must be happy she’s alright to have entered her. It’s possible the two of them could run,” Berry said.

The only other entry, Apple’s Jade, appeared set for a step-up in trip after her losing run at Down Royal earlier this month. So the second top-flight prize of the National Hunt season looks likely to be again dominated by Mullins who first won the Morgiana in 1993 with Padashpan when it held Listed status.

If the champion trainer has the Grade 1 big-guns on Sunday, then there’s little doubt that Michael O’Leary’s Gigginstown Stud operation looks to hold the major weapons for both Grade 2 novice chase events.

Both races got a 45-minute supplementary entry period under Rule 98 after they originally attracted fewer than 10 entries on Tuesday. The Florida Pearl Chase eventually got 11 confirmations and seven of those, including the likely favourite, Alpha Des Obeaux, carry O’Leary’s colours.

The Ryans Cleaning Craddockstown Chase still wound up with just eight entries and O’Leary’s hold over the two-mile event could be even more pronounced since six belong to him, including the leading Arkle fancy, Identity Thief.

Mullins isn’t represented in either of the Graded novice chases but his French import, Senewalk, already prominent in some ante-post lists for Cheltenham’s Supreme Novice Hurdle, is entered at both Punchestown on Saturday and Cork on Sunday.

“The ground is currently yielding, yielding to soft in places and we will have fresh ground on the hurdle track both days. This weekend features our first Grade 1 of the season and really marks the beginning of the top class action for us at Punchestown,” said the track’s racing manager, Richie Galway.

Ground conditions at Fairyhouse on Wednesday are forecast to be soft so it’s possibly no coincidence that the Mullins team send three runners including the former high class staying handicapper Aussie Reigns who makes his jumping debut in the opening maiden.

Whether two miles over flights will be a sufficient stamina test for Aussie Reigns is questionable and Mullins will know precisely how dangerous an opponent Avenir D’Une Vie is likely to be.

The horse was part of the Gigginstown team taken away from the champion trainer in September and Avenir D’Une Vie left a fine impression on soft ground last February when running away with a Naas bumper.

It also looks significant that Avenir D’Une Vie is Bryan Cooper’s only ride on the day he makes his return to action after fracturing his right arm over a month ago.

Asthuria should be hard to beat in the mares maiden while Mullins runs Some Neck against the Gordon Elliott-trained Champagne Classic in what may unfold into an intriguing bumper.

Champagne Classic was behind Joey Sasa at Galway just over a fortnight ago and had only half a length to spare over Justmemyselfandi who was running on well at the finish in third. An extra half mile should help Liz Doyle’s runner, as will having Finny Maguire on his back, and Justmeyselfandi could represent a value option.

Soft going may also be a plus factor for the Doyle-trained Emma Beag in the mares handicap hurdle. This one landed a maiden at Sligo during the summer on heavy going and doesn’t look badly treated on a mark of 100.