Goodwood: Trained by Charlie Appleby and ridden by William Buick, the 4-1 shot stepped up 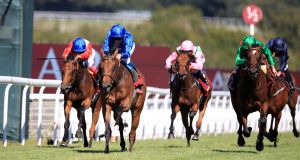 Wild Illusion put her superior stamina to good use to win the Qatar Nassau Stakes at Goodwood.

Trained by Charlie Appleby and ridden by William Buick, the 4-1 shot stepped up on her second places in both the Oaks at Epsom and the Ribblesdale at Royal Ascot to claim the second Group One success of her career.

Buick opted to set the early gallop in the six-runner heat, with Wild Illusion rolling along nicely in front and Urban Fox and Rhododendron keeping tabs on her, along with Veracious.

However, when the pace heated up in the straight, Aidan O’Brien’s Rhododendron dropped away tamely, leaving the William Haggas-trained Urban Fox to serve it up to the front-runner, who was also fourth in the 1000 Guineas.

Dropping back to 10 furlongs from a mile and a half, Wild Illusion had plenty in reserve when push came to shove, kicking on again to win by two lengths.

Derby-winning trainer Appleby, who along with Buick has had a tremendous season, said: “We’ve been looking for her three-year-old career to get that Group One tag under her belt.

“Coming into the race — take out Rhododendron — in respect of the three-year-olds, she brought the best two-year-old form into it. She is a past winner of the Marcel Boussac and I felt dropping back to 10 furlongs would suit her.

“William gave her a great tactical ride from the front. He is fantastic on the front end, we have seen that time after time and he had the right, willing partner.

“I just said to William, from half a mile out start to stretch them as she will get a mile and a quarter standing on her head, so let’s see if the batch in behind would see it out.

“As far as I’m concerned, she saw it out gamely and the others haven’t.

“The Yorkshire Oaks is potentially there under consideration. That (Prix de l’Opera) is what we had her earmarked for.”

He added: “In the spring, she ran well in the Guineas and I was having to slightly mind her going into the Oaks and since Ascot, she has turned a corner.

“Physically I think that is the best she looked so far this season, walking round the paddock. She is a Dubawi and this is their time of year. They thrive in the second half of the season.

“As I said to the lads in the yard, it is fantastic but the only problem is it puts the mantle higher for next season.

“It has been a phenomenal season and I’m just lucky to be in this position, with this calibre of horse and the team behind me.”