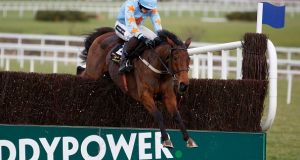 Willie Mullins relies on Un De Sceaux in the bet365 Celebration Chase at Sandown on Saturday after deciding against declaring Douvan and Vautour.

The master of Closutton entered his three brilliant chasers for the two-mile Grade One at the five-day stage for a prize that promises to be key in his race with Paul Nicholls to be crowned this season’s champion National Hunt trainer in Britain.

In a repeat of the Queen Mother Champion Chase at the Cheltenham Festival, Un De Sceaux will clash with Nicky Henderson’s stable star Sprinter Sacre.

Un De Sceaux was a red-hot favourite for the feature event on day two of the showpiece meeting, but the resurgent former champion Sprinter Sacre brought the house down after a comprehensive success.

Nicholls will be hopeful of picking up plenty of prize-money after declaring three runners.

Last year’s Champion Chase hero Dodging Bullets appears the stable’s number one hope, but needs to raise his game significantly after being well beaten when defending his crown at Prestbury Park.

Gary Moore’s pride and joy Sire De Grugy, winner of the Champion Chase and this event in 2014, completes the six-strong field.