2013 winner Sprinter Sacre among the 23 entries for Wednesday showpiece 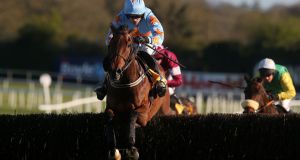 The former was an impressive winner of the Arkle last March but the Willie Mullins-trained ante-post favourite has only been seen once this season, when he fell at Leopardstown.

Sprinter Sacre won the Champion Chase by 19 lengths in 2013 and, despite his well-documented issues, has looked rejuvenated this term.

He could be joined in the line-up by Nicky Henderson-trained stablemates Captain Conan, Josses Hill and Simonsig,

Sire De Grugy was a popular winner in 2014 and has also returned to something like his best this term, while last year’s hero Dodging Bullets has yet to be seen in this campaign.

Paul Nicholls’ eight-year-old is now back in training after a setback and is on course to make his return next month, according to big-race jockey Sam Twiston-Davies.

“I think he’s been a little bit forgotten because he hasn’t been seen this season but hopefully he’ll be back at Newbury (Game Spirit),” Twiston-Davies told Betfred TV.

“I know Harry Derham (work rider) is very happy with him, he’s making some good inroads which is great.

“With a view to the Champion Chase, he beat everything put in front of him last year and he’s one we’re really looking forward to getting back on the track.

“We want to get a prep run in and then turn up fresh and well.”

1 Ireland Slam England at the Gardens to open up Grand ambitions
2 ‘Manchester United are lucky to have you’: Klopp responds to Donegal schoolboy’s letter
3 Leinster get the job done against Ospreys
4 Six Nations: Ireland v England all you need to know guide
5 Munster break Zebre resistance in second half
Real news has value SUBSCRIBE

Dundalk take the points but Shelbourne pointers are positive 22:24
Munster break Zebre resistance in second half 22:06
Ireland Slam England at the Gardens to open up Grand ambitions 21:56
Connacht come away from Edinburgh with nothing 22:08
Leinster get the job done against Ospreys 21:54
Here is your handy guide to sport on television this week