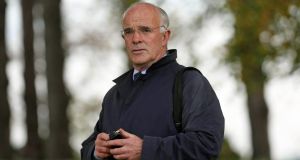 Originally scheduled for April 2nd, just before Fairyhouse’s Easter festival and the €275,000 Boylesports Irish Grand National, the Referrals Committee hearing has been postponed due to the non-availability of a legal representative on the earlier date.

The Referrals Committee is set to be presented with new video evidence which could conflict with evidence given at the original enquiry into Foxrock’s running and riding in a handicap chase.

Both Walsh and jockey Adrian Heskin gave evidence at the original enquiry, the official report of which states that “as the horse returned to the stable yard, Mr Walsh noticed that (the horse’s) front shoes were missing.”

The Turf Club’s veterinary officer examined Foxrock after the race and told the stewards that the horse was slightly lame and had pulled off both his front shoes during the race. The only sanction imposed at the enquiry was that Heskin was suspended for one day for failing to report in the first instance that something may have affected the running of his mount.

However it is understood the case has been reopened by the Turf Club on the basis of new video evidence which allegedly shows Foxrock wearing both front shoes in the immediate aftermath of the race.

Racing’s regulatory body has said the Referrals Committee will examine this video evidence and “any other rules related issues which arise”.

After an extensive investigation, the horse’s owner Robert Martin was disqualified for 10 years while other penalties included jockey Eddie O’Connell losing his licence for four years.

Yachvili’s trainer James Lambe was cleared of all involvement in the controversial events but both he and O’Connell are appealing to the Supreme Court last year’s High Court decision to dismiss their challenge against the Turf Club’s ability to apply or enforce the rules of horseracing.