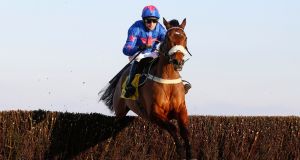 Cue Card swept to his ninth Grade One triumph with a tremendous performance in the Betfair Ascot Chase at the Berkshire course.

The Colin Tizzard-trained 11-year-old will now head to the Timico Cheltenham Gold Cup after showing he still retains plenty of ability with his second win in the race — four years on from the first.

Course specialist Royal Regatta made the running, but Paddy Brennan never let him out of his sight on Cue Card, who eased into the lead with a brilliant jump at the fourth-last.

Royal Regatta stuck to his guns for a while longer, but Cue Card’s class came into play in the straight and the 4-9 favourite drew further and further clear to win by 15 lengths. Shantou Flyer stuck on to claim second place from the tiring Royal Regatta.

Tizzard, who is 10-1 with William Hill to saddle the first three home in the Gold Cup, said: “It’s nice to see his well-being, really. After the last race (second to stablemate Thistlecrack in the King George) he was a bit wrong and had a big, fat leg and we said he wasn’t right, but he has been perfect all the way through.

“He is 11 and you wonder ‘how many times can he keep doing this?’ but he is back again. Today he jumped beautifully and he destroyed them. It was everything you want to see and more.

“Paddy Brennan was instrumental, he said it would not hurt to go back to two miles five, as they go a fast pace and it will be Cheltenham Festival pace and instead of having three months off you can take this in, then back off him a bit.

“In the ring he looked as well as ever and on form he needed to do that. He has been a brilliant horse for a long time. I spoke to Jean (Bishop, owner) and it is her ambition to win the Gold Cup.”

He added: “The plan is to run Cue Card, Thistlecrack and Native River in the Gold Cup, and possibly Theatre Guide as well.”

Brennan said: “It was a great performance. The ground is really dead. It was hard to know what pace we were going.

“When I looked round after the last I thought we were only two or lengths clear — that sums up what a great horse he is. I knew this trip was on the sharp side, but he was brilliant.

“He’s been massive for my career — he’s changed my life over the last couple of years.”