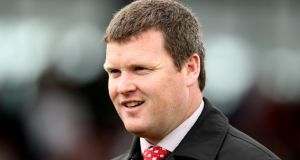 Trainer Gordon Elliott: will be hoping The Game Changer can secure €300,000 first prize for the Galway Hurdle. Photograph: James Crombie/Inpho

The financial aspect of Ireland’s richest ever National Hunt race is reason enough to target the Guinness Galway Hurdle but Gordon Elliott probably wants to win the festival highlight more than most and The Game Changer could finally deliver the €300,000 prize to the in-form trainer.

Co Meath-based Elliott has been the jump season’s most successful trainer so far but he has unfinished business with a race that has proved frustratingly elusive to him.

A first Galway Hurdle runner in 2008 finished out of the money but Dirar was third in both 2010 and 2011 while Cause Of Causes would have won in another couple of strides in 2012 only for Rebel Fitz to pip him.

A year later Flaxen Flare found only Missunited too good but 2014 looked set to finally fulfil Elliott’s Galway Hurdle ambition only for Bayan and The Game Changer to fill the places behind Thomas Edison.

All four in last year’s frame, including the fourth Hisaabaat, are back for another crack at the race and Thomas Edison’s trainer Tony Martin also runs the long-time ante-post favourite Quick Jack.

Willie Mullins’s five hopes include the three topweights, with Ruby Walsh on board the former Grade One winner Diakali. Aidan O’Brien’s pair, Marchese Marconi and Plinth, are among five JP McManus-owned hopes.

The run-in to the week’s highlight could yet have echoes of the 2013 Plate when Carlingford Lough landed a huge gamble despite having initially been only a reserve.

This time Jessica Harrington’s Modem is a high-profile first reserve having secured the festival’s amateur prize on Monday to potentially set himself up for a big race double that hasn’t been completed since Athy Spirit pulled it off in 1990.

Modem needs one to come out yet Robbie Power is declared to ride him with Nina Carberry down for Power’s usual mount, Macnicholson who is No 9 of the maximum 20 runners. Mark Bolger is on board Harrington’s other declaration, Rae’s Creek.

The way Modem tackled the hill on Monday indicates he will be a major player if getting into the mix and he is at the right of the handicap compared to Diakali who impressed in his first start in over a year at Tipperary. But The Game Changer has looked a transformed character since going over fences with more aggressive tactics employed on him.

Davy Russell, twice a Galway Hurdle winner, is on board again and at a big price, the partnership could be value to finally secure Elliott the big pot.