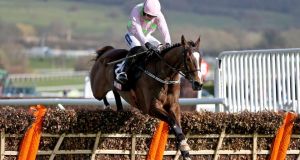 The featured hurdle shares €100,000 prizemoney with the big steeplechase half an hour earlier and doesn’t have a star attraction like Vautour who bids to get his chasing career back on track in a three-runner Grade Two event.

But under all its various titles over the years, the Boylesports had been famous for ultra-competitive fields where betting support often talked and which required tough experienced horses to thrive in the big-field hullabaloo.

However last year, the novice Gilgamboa showed up with just three runs under his belt and sluiced up for JP McManus with a backed-off-the-boards favourite, Quick Jack, only finishing third.

Pairofbrowneyes has also run just three times over hurdles, and only half a dozen times in his racecourse career overall, winning twice, including when scoring last time out at Punchestown in November.

He has also won on heavy going which will be an important factor in the likely conditions and Doyle has never made any secret of her regard for the lightly-raced six year old.

The McManus camp are obviously keen to follow up on last year’s victory and Snake Eyes travels from Britain, along with Kashmir Peak, to try and become the first cross-channel based winner of the race since Master Tribe in 1997.

Snake Eyes was sixth last year and is 5lbs higher in the ratings this time although he won well on testing ground at Sandown on his comeback. Nevertheless it wouldn’t be a huge surprise if Tony McCoy is on the wrong one as Waxies Dargle looks to have a lot going for him as does Shantou Ed among McManus’s four hopes.

McCoy will be on Byerley Babe in the big chase in which He’llberemembered looks to have solid claims for recording back to back wins.

Paul Fahey’s runner is a couple of pounds higher in the ratings compared to the mark he won this race off in 2014 but Johnny Burke claims and the teak-tough veteran has been in fine form this winter over hurdles.

This trip and this ground look to suit him perfectly and Fahey, who has also booked Burke to replace the suspended Paul Townend on Lots Of Memories in the Grade Two feature at Naas, looks to have managed to get He’llberemembered back into this traditionally prestigious race with another good chance.

Most attention at Leopardstown however is likely to revolve around Vautour, a 1-4 failure here at Christmas when he never looked happy and struggled to force a dead-heat for second behind Clarcam.

Willie Mullins has put that down to a possible muscle issue and elected to bring him back for the Grade Two Killiney Chase.

If initial ambitions for this horse are to be realised over fences, even a smart 140-rated horse like Real Steel, who will relish the step back up in trip, shouldn’t be an obstacle.

Leopardstown’s concluding bumper has a pedigree of throwing up future stars, including in 2002 the future Gold Cup hero Kicking King.

Meanwhile Mullins runs three back on home ground at Naas including the Grade One winning mare Glens Melody in a Limestone Lad Hurdle which is likely to be a next successful step up the ladder for the highly rated Kittens Rock.

Edward O’Grady’s view that he is future top-flight performer is backed up by a Champion Hurdle entry and quotes of as low as 25-1 will look pretty hollow if the horse can’t step up here.

Lots Of Memories ran third to Do Poli at Leopardstown over Christmas, form which looks good enough in itself for the Grade Two novice chase. But if Lots Of Memories doesn’t have to cut out the pace he would look even harder to beat. I’ll Be Your Clown last raced on the flat off a mark of 93 and should be sharper for his jumping debut in the opening maiden hurdle.