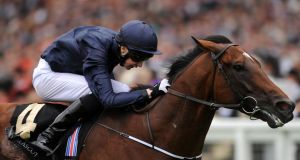 Jospeh O’Brien and Declaration of War will be looking to add the Coral Eclipse at Sandown to the CV.

Camelot has had two goes at Al Kazeem this season and failed so Aidan O’Brien pitches both Declaration Of War and Mars against the top English star in a third-time-lucky bid in today’s Coral Eclipse at Sandown.

O’Brien is chasing a sixth win in the Group One highlight and has booked Ryan Moore for the sole three-year-old in the seven-runner race, Mars, leaving Joseph O’Brien to maintain his Queen Anne Stakes winning partnership with Declaration Of War. The latter was a brilliant winner at Ascot less than three weeks ago and although Declaration Of War has winning form at a mile and a quarter, his trainer is unsure as to whether his stamina will hold out at the very highest-level.

“Obviously going a mile and a quarter at the top level is different. We should learn a lot about him for the rest of the year. We know he won’t mind stepping back in trip after this. He showed plenty of speed at Ascot but we could put the mile and a quarter thing to bed after this. It’s a chance to run the distance at the top level and see where we go for the rest of the season,” O’Brien said yesterday.

Sea The Stars is the only three-year-old to have won the Eclipse in the last seven years and Mars will attempt to do that after being third in the St James’s Palace Stakes at a mile and sixth at Epsom. “Ryan thought he would have preferred a clearer run (at Ascot). It looks like a mile and two should suit him judged on all his races,” O’Brien said.