O’Brien aims at Kentucky glory with Lines Of Battle 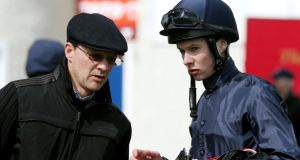 Joseph O’Brien with his father, trainer Aidan. Joseph takes the ride on the regally-bred Victory Song for his father at Tipperary this evening. Photograph: Lorraine O’Sullivan/Inpho

Lines Of Battle is rated as low as 14 to 1 on this side of the Atlantic to create history in Saturday’s Kentucky Derby but American layers believe Aidan O’Brien’s star to be very much an outsider for the famous “Run For The Roses”.

No European-trained runner has scored in America’s most famous race and Lines Of Battle will be the fifth horse O’Brien throws at the “Durby”, with Ryan Moore set to ride.

The top British rider was on board Lines Of Battle when the partnership was successful in the UAE Derby at the end of March. Moore has yet to ride in the Kentucky Derby.

“He worked this morning and went well,” said O’Brien yesterday. “The surface will be an unknown but he’ll be able to have a canter on it.”

The Irish colt is the sole overseas challenger in the 10 furlong dirt highlight and is a general 20/1 in ante-post betting in Europe, although Paddy Power go as low as 14/1. Declarations for the big race are due tomorrow, the same day that Lines Of Battle is scheduled to arrive at Churchill Downs.

But Kentucky horse-players appear dismissive of Lines Of Battle’s chance, hardly surprising on the back of Daddy Long Legs last year who finished last, having also landed the UAE Derby beforehand.

However, Master Of Hounds ran a much better race for O’Brien in 2011 when fifth. Both Johannesburg (eighth) and Castle Gandolfo (12th) ran behind War Emblem in 2002. Bold Arrangement’s second in 1986 remains the best European performance to date in the Kentucky Derby.

Lines Of Battle forms part of a three-pronged Classic attack for the O’Brien team this weekend, with Mars, Cristoforo Colombo and George Vancouver in line to run in Saturday’s 2,000 Guineas at Newmarket. The supplemented Moth heads the trainer’s hopefuls for Sunday’s 1,000 Guineas.


Exceptional pedigrees
The champion trainer sends half a dozen of his powerful Ballydoyle team on the short journey to Tipperary this evening where Line Drummer can do best in the first handicap.

The Galileo colt broke his maiden at this track last August on the back of two placed efforts which indicated testing ground won’t be a problem.

Some of the other Ballydoyle hopefuls this evening boast exceptional pedigrees, none more so than the newcomer Victory Song in the mile-and-a-half maiden.

Out of the Oaks runner-up All Too Beautiful, a half-sister to Sea The Stars, Victory Song is Joseph O’Brien’s pick of his father’s two runners but experience could swing things the way of Dubai Deer.

Freewheel is another son of Galileo in the nine-furlong maiden but he faces Dermot Weld’s Resolute Response, a half-brother to the Group One winner Casual Conquest.

Morning With Ivan can confirm Leopardstown placings with Kingdom in the finale now that she’s upped to a mile-and-a-half while Hurricane Sky can take the nine-furlong handicap.