O’Brien has four possibles for the Grand Prix de Paris 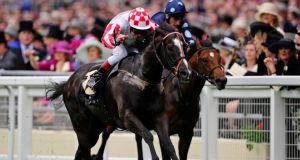 Sole Power and Johnny Murtagh winning at Royal Ascot. The Darley July Cup is next up for Eddie Lynam’s star at Newmarket on Saturday.

Up to now the distance of Saturday’s Darley July Cup has always proved a furlong too far for Sole Power but Johnny Murtagh is hopeful the top Irish sprinter can change that with a vengeance at Newmarket this weekend.

The partnership notched a memorable success in last month’s Kings Stand Stakes at Royal Ascot, where Murtagh pounced late on Sole Power to edge out the top South African horse, Shea Shea, who will re-oppose this weekend.

The old rivals were among 15 entries left in the July Cup at yesterday’s forfeit stage, which saw Sole Power’s trainer Eddie Lynam also leave in his Group Three Curragh winner Slade Power, while Aidan O’Brien has the option of running both Gale Force Ten and Reply.

The Golden Jubilee winner Lethal Force tops the betting with the Paddy Power organisation at 4/1 about that horse, with Shea Shea next best at 9/2, and Sole Power quoted at 10/1, a possible reflection of how the six-year-old has never before won past five furlongs.

Murtagh, however, is confident the speed-packed dual-Group One winner is a different proposition now compared to when previously attempting the longer trip.

‘Better they become’
“I think he’ll get it. He’s settling better now, and if I can just keep him relaxed I think he might even appreciate the six furlongs now,” the former champion jockey said yesterday. “He’s a pro now, just stands in the gates until he hears that click. Before, even at five furlongs, there was no pace fast enough for him. But with these sprinters, I find the more they do it, and the more they race, the better they become.”

Murtagh last won the July Cup on Starspangledbanner in 2010 but the hold-up tactics Sole Power thrives on will be more reminiscent of when he also scored in the prestigious Group One on Firenze.

“There isn’t much between my fella and Shea Shea, and now we have the horses that ran in the Jubilee involved as well. Lethal Force won that, but I thought (Adam) Kirby rode a great race that day and might not get it as easy at the front this time.”

Aidan O’Brien has left four entries in Saturday’s Grand Prix de Paris, including Battle Of Marengo and Mars, after 18 were left in Longchamp’s €600,000 Group One at yesterday’s forfeit stage. Festive Cheer, third in the Irish Derby, and the Curragh Group Three winner Flying The Flag are also among the Ballydoyle possibles.

Legendary French trainer Andre Fabre is seeking a 12 win in the race and has three possibles, the Juddmonte-owned Flintshire, the Listed winner Au Revoir and the Epsom Derby fifth Ocovango.

In other Group One news, David Wachman will make a call this morning on whether or not his Royal Ascot heroine Duntle travels to Newmarket on Friday for a Falmouth Stakes clash with Sky Lantern. Duntle pleased the trainer in a work-out yesterday.

“We want to be absolutely sure. When you work a horse, you wait 24 hours to see how they come out of it and make your mind,” said spokesman for Duntle’s owners, Alan Cooper.

Good run
Barry Geraghty has teamed up with Limerick trainer Michael Hourigan to some effect this summer and Dawerann can continue their good run in this evening’s Roscommon opener.

Geraghty was on board the 114 rated Dawerann when coming up half a length short of Ebazan at Ballinrobe last time, a second successive runner-up spot at the Mayo track having previously finished behind Call Me Bubbles.

The previously disappointing Ebazan finally showed the sort of form suggested by a highly-rated flat operator on that occasion and a 114 rating should be enough to win a maiden hurdle like this for Hourigan who supplied Geraghty with a winner, What’s Happening, at Limerick on Sunday. Ruby Walsh is also in action this evening and fast ground looked to be the key to Shamar scoring at Cork in May so the forecast going looks to be right up the Rich Ricci-owned gelding’s street.

The Irish National heroine Liberty Counsel is the star attraction in the three mile handicap hurdle but the unexposed Gowran maiden winner Best Value can live up to his name.