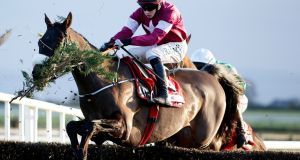 Bryan Cooper on No More Heroes at Fairyhouse in November. The horse will get a run at Leopardstown tomorrow. Photograph: Alan Crowhurst/Getty Images

Willie Mullins and Gordon Elliott have 14 weekend runners between them, but with just over a fortnight out from the Cheltenham festival their primary focus is likely to be on what happens after racing at Leopardstown tomorrow.

The significance of the traditional post-racing gallops got a timely boost last year with a plethora of star names working in public, including when Mullins used it to give Vautour an important pre-festival racecourse school prior to his devastating JLT success.

Elliott also gave Don Cossack and No More Heroes a spin before going to the Cheltenham festival, and they are set to do the same tomorrow.

“We’ll probably take the two of them for a spin, but they won’t be doing anything too serious,” said Elliott. “I’m not sure how many we’ll take as it’s a lot earlier than it has been in the past.”

No More Heroes is as short as 7-4 favourite for the RSA, while Don Cossack is disputing Gold Cup favouritism with Vautour.

Mullins has already indicated another of his prime Gold Cup hopes, Djakadam, could continue building up to steeplechasing’s “blue riband” at Leopardstown, and although other plans are as yet unclear the champion trainer added: “It will probably just be a handful of horses schooling rather than working.”

Another interesting horse that could appear after racing is the Triumph Hurdle favourite Ivanovich Gorbatov.

Prior to all of that the Mullins team can secure some pre-festival reassurance as plenty will reckon both their Navan runners on Saturday can score, while three of the champion trainer’s four Leopardstown starters look to hold decent chances.

Both Great Field and So Young return from long absences in the conditions hurdle but it looks significant that new French recruit Great Field has a number of festival entries, including the County and the Coral Cup.

This one beat Don’t Touch It in a bumper last year, and finishing third to Woodland Opera and Coney Island on his hurdling debut last November was hardly a poor effort. He should also appreciate a step up in trip.

Cooper does have a pair of rides at Navan’s programme and the most interesting is undoubtedly General Principle.

At that stage the idea of him starting in a late February maiden hurdle must have seemed remote but now that he is he should prove tough to beat.

The point-to-point runner-up Bel Sas looks another major Gigginstown player in the bumper, while Rolly Baby should appreciate the experience, and the longer trip, from his chasing debut at Limerick over Christmas.

Portrait King’s cross-channel task takes him to Newcastle where the popular grey stayer will aim to repeat his 2012 success in the four-mile-plus Eider Chase.

The Pat Griffin-trained veteran is joined in an Irish assault by Stuart Crawford’s Glenquest and the Portrait King camp has already had one result in an incident-free trip to Newcastle after the horse’s arduous cross-channel journey to last month’s Welsh National.

“We’ve given him plenty of time to recover and he’s back to himself again now. He’s already travelled over, and he’s in good form,” Griffin said.

“He’s on the same mark he won the race off before. He has a nice racing weight and we have a good jockey [Brian Hughes] so we’re hoping for a big run. I just hope the ground is not too heavy.”